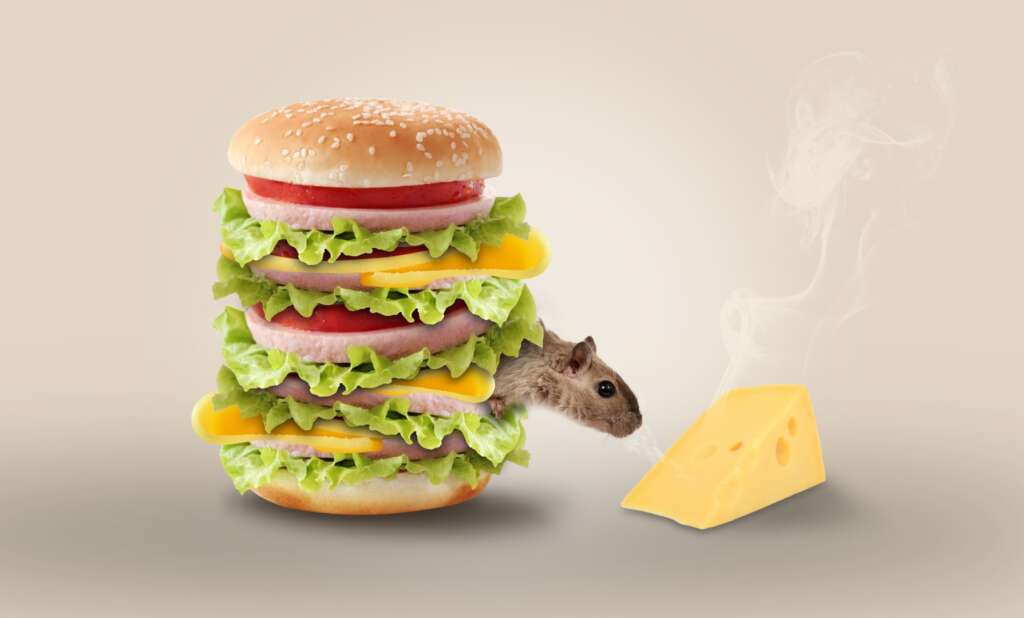 Rats which eat a diet consisting of meat pies, dim sims, chips, cakes, and cookies experience changes in brain activity which affect both their motivation and preference for sugary drinks, Australian researchers have found.

The study1, published by UNSW researchers in the journal Appetite earlier this month, found lengthy exposure to what was called a ‘cafeteria-style diet’ reduced the rate of motivation or need for sugary drinks and caused a preference for these drinks in some experimental setups, but did not lower a rat’s ‘liking’ of these beverages.

“In summary, our results show that chronic consumption of a cafeteria-style diet alters sweet taste preference and exerts pronounced motivational effects in the absence of changes to sweet taste processing,” the researchers wrote.

In a world first, the researchers examined the neuronal activity of the rats, finding that a long-term diet of processed foods actually changed how the brain functioned when it came to wanting and liking food.

Dr Justine Fam of UNSW’s School of Psychology told Lab Down Under that the motivation for the research was to examine the consequences of long-term junk food diets and the resulting obesity, especially the processes which maintain an individual’s weight rather than those which help someone put on weight in the first place.

“There is evidence that diet-induced obesity blunts the brain’s response to consumption of so-called ‘junk’ foods. One hypothesis is that these diminished brain responses may drive further consumption of unhealthy foods, perpetuating a vicious cycle,” she said.

Junk foods which are high in sugar and fat, such as cakes, biscuits, meat pies and potato chips, are a “mainstay” of the Australian diet and pose a significant risk to people’s health if consumed for a long time, Dr Fam said.

“We need to better understand the factors that maintain obesity, so that we can target them more effectively to help people lose weight.”

The researchers opted to use rats for their modelling because this allowed complex factors to be studied at a simpler level, Dr Fam said. In real-world scenarios, various environmental, social and genetic factors all wove together in a complex web when it came to the beginnings of obesity and its maintenance, she added.

A 10-week crash diet of pies, chips and cakes

For their study, the researchers used 32 adult, male Sprague Dawley rats housed in group of four in plastic boxes. Over 10 weeks, half of the rats were solely given regular chow while the other half were also fed the cafeteria-style diet consisting of meat pies, dim sims, chips, cakes, and cookies.

The rats were given a choice of sugar water consisting of 2 per cent or 8 per cent sucrose, or a choice between an 8 per cent and 32 per cent sucrose solution. These drinks were supplied through a water spout attached to an electric sensor which detected and recorded when a rat took a lick of the spout.

“After the 10-week diet intervention, we then measured preference for the different sweet drinks again. Finally, we examined their brain tissue to look at whether the junk food diet produced a change in brain activity in response to the sweet solutions.”

Dr Fam told Lab Down Under that a ‘cafeteria-style diet’ consisted of pleasant tasting foods which were high in sugar, saturated fat and salt, and low in nutritional value.

“In addition to regular chow and water, which were always available, rats in the cafeteria diet group were fed an assortment of cakes, cookies and pies each day. Here we wanted to model the variety and palatability of the modern food environment, where people are exposed to a vast array of flavours and tastes each day,” she said.

The research uncovered “interesting, subtle effects” which this diet of processed food had on the rats’ taste preference for the sugary drinks provided, Dr Fam said.

“We found that diet-induced obesity reduced preference for the sweeter option when there was a small difference between how sweet the two options were. This might indicate a decreased sensitivity in detecting sweet tastes. However, when given a choice between a very sweet and mildly sweet drink, obese rats had a stronger preference for the very sweet drink than controls.”

One finding, also previously reported in prior studies, was a consistent suppression in the rats’ motivation to consume sugary beverages, with the research showing the rats drank less overall and started drinking later in the test.

The most surprising finding however was that despite a decreased motivation for sugary drinks, this did not change how much obese rats “liked” the solution, despite choosing to drink it more often than the controls.

“Given the cafeteria diet is so tasty, we expected it to change how pleasant the rats perceived the sweet drinks to be in comparison, but our results clearly show this is not the case,” Dr Fam said.

How much a rat “liked” the drink was measured by examining clusters of licks, with the greater number of licks suggestive of a rat which was enjoying the drink more.

Dr Fam explained to Lab Down Under that motivation and liking could be separated in terms of this experiment by thinking about the difference between liking something and wanting it.

“While we usually ‘want’ what we ‘like’, and vice versa, the two sometimes diverge – after eating a whole lot of chocolate, you may not want any more, even though you still like it.”

Exercise was another example, Dr Fam said, with some people being highly motivated to go for a run but sometimes not actually enjoying the experience.

Amongst the rats, both the cafeteria diet and control groups ‘liked’ the sweet drinks to the same degree. However, the rats eating junk food ‘wanted’ the drinks less.

“This may have been because the cafeteria diet group were exposed to such a wide range of tasty food, reducing the motivation to drink sugar water, even though they appeared to ‘like’ it just as much. It’s worth noting that we can’t say whether the decreased motivation was specific to the sugar water; it could be a general reduction in motivation.”

Regarding the brain, there is good evidence that ‘liking’ and ‘wanting’ are connected to separate systems that rely on different brain regions and neurotransmitters, Dr Fam said.

The study found that cafeteria diet’s effect on the rats’ brain activity in the insula and nucleus accumbens matched the changes in their behaviour when consuming sugary drinks.

“The diet reduced neural activity in both brain regions, but the effect was stronger in the nucleus accumbens than in the insula – and that matches how we found stronger effects on motivation than on taste perception. This was really exciting as it is the first time that consumption of sweet drinks has been linked to brain activity in a diet study,” Dr Fam said.

Caution when moving from rodents to humans

It is important to note that this study was done in rats and that similar results may not immediately be found in humans. Caution should always be taken when extending results from research in rodents to human beings, Dr Fam told Lab Down Under.

“For example, we think the use of the cafeteria diet directly models how people eat, so is very relevant, while the preference tests were deliberately run in a highly controlled environment that may not be directly analogous to everyday situations experienced by people,” she said.

“Nonetheless, our results suggest that diet-induced obesity does not alter perceived taste, and therefore, contrary to what has been suggested, increased preference for ‘junk’ foods do not relate to taste perception. That means that other factors are driving changes in food preferences, which would be an interesting direction to take this research.”

Another area which may spur future research is the effect of extended exposure to the cafeteria diet and how this dictates weight gain in the rats.

“One unanswered question that we are pursuing is whether the effects on sweet taste preference and motivation were driven by the diet per se or to the metabolic effects of excess weight gain. It will also be very interesting to see if these junk food-induced changes can be reversed by a healthy diet, to mimic what happens when people change their diets,” Dr Fam said.