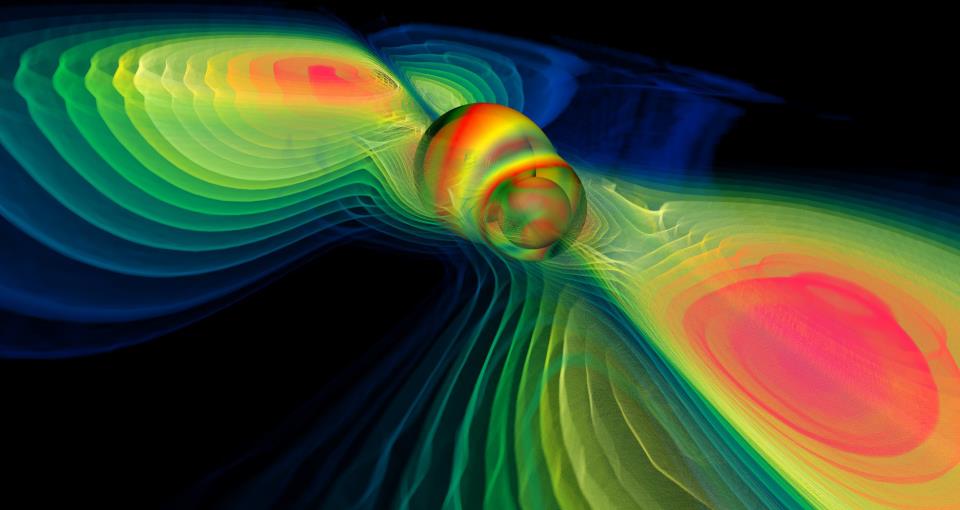 A state-of-the-art detector has spotted two rare events which Australian researchers say could come from high frequency gravitational waves originating from a primordial black hole or a cloud of dark matter.

In a paper1 published earlier this month, researchers from the ARC Centre of Excellence for Dark Matter Particle Physics (CDM) and the University of Western Australia described the detector and the two events, which occurred during the device’s first 153 days of operation.

While the exact nature of these events is yet to be determined, the researchers have hypothesised a number of possible sources including cosmic rays, fireballs and meteors, high frequency gravitational wave sources, dark matter candidates, and axion quark nuggets.

“It’s exciting that this event has shown that the new detector is sensitive and giving us results, but now we have to determine exactly what those results mean,” said co-author and CDM student William Campbell.

The detector’s “premier target” is high frequency gravitational waves, which to this moment have yet to be spotted but which, if they exist, will help us probe new physics such as the possible answer to one of the main unanswered questions in astrophysics: what exactly is dark matter?

Low frequency gravitational waves on the other hand, have been spotted and were first detected in 2015. These come from sources such as merging black holes and/or neutron stars and spinning black holes.

Predicted by physicist Albert Einstein, gravitational waves are ripples in space-time, the four-dimensional manifold consisting of our three spatial dimensions as well as time which makes up the fabric of the universe. Certain types of events will cause these ripples and so by detecting them, scientists gain access to yet another tool with which to probe the inner workings of our universe.

The CDM’s detector is located in Perth, Australia and works using a component called a quartz crystal bulk acoustic wave resonator (BAW), essentially a large quartz crystal disk which vibrates at high frequencies as acoustic waves travel through it. These waves can produce electric charge which is then detected by conducting plates on the outer surface of the disk.

The BAW device is connected to a superconducting quantum interference device, known as SQUID, which is an extremely sensitive amplifier. The entire setup is located in extensive radiation shielding to protect it from stray electromagnetic waves and cooled to low temperatures to allow low energy vibrations of the crystal to be picked up as large voltages with a boost from the SQUID amplifier.

Ruling out the obvious candidates

After 153 days, or over 3,600 hours, the detector picked up two “strongly significant events” in March and November 2019. The events, which were described as “a single short pulse energy deposit in an acoustic mode”, were “most likely” to have been picked up from within the BAW cavity and not from any other part of the device, the researchers said.

To make sure these events were not caused by more ordinary sources, the researchers compared observations of other events such as weather perturbations, earthquakes, meteors, cosmic showers and fast radio bursts. No phenomena of these kinds took place at the same time as the events picked up by the BAW device.

Despite ruling out these more mundane phenomenon, the researchers could not say what precisely caused the two rare events spotted by their detector, saying they could be caused by anything from quantum fluctuations within the machine itself to more unusual sources such as dark matter.

“Despite assigning the observed events to the BAW cavity itself rather than to the detection system, we do not claim that they were [high frequency gravitational waves] of any source. In fact, there is a number of physical phenomena that can produce these kinds of events ranging from internal solid state processes to highly speculative models of new physics,” they wrote in their paper.

Campbell said that as well as high frequency gravitational waves, possible origins for these events were the presence of charged particles, mechanical stress build up, a meteor event, an internal atomic process, or something more spectacular such as high dark matter candidates.

What the experiment showed for the first time was that these types of devices could be used as highly sensitive gravitational wave detectors, he said.

Further experiments to hone in on the source

To figure out precisely what lay behind these events, further experiments will have to be conducted in both the original detector and a clone.

“The next generation of the experiment will involve building a clone of the detector and a muon detector sensitive to cosmic particles. If two detectors find the presence of gravitational waves, that will be really exciting,” Campbell said.

This should help provide more details, giving further clarity on exactly what caused these events, the researchers wrote.

“The second implementation of this detector should rule out most of the possibilities. For this, the second generation detector will consists of two detector crystals with independent SQUID and digitizer read outs. In addition, the system will be equipped with a complementary muon detector to run a coincidence analysis with cosmic rays.”