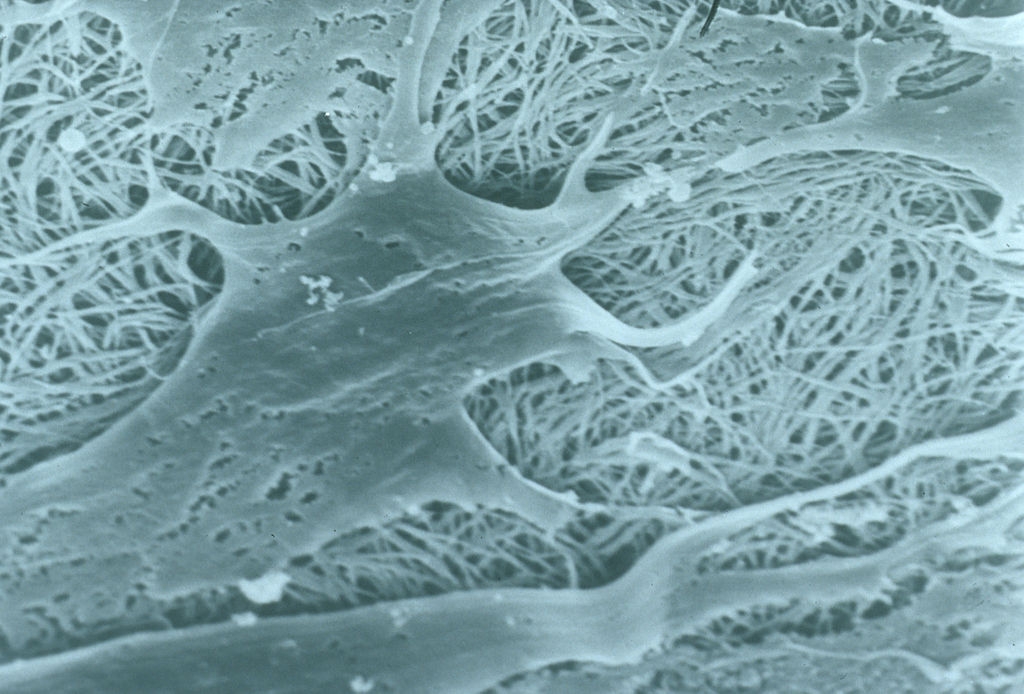 Researchers from UNSW have uncovered how tiny anchor-like chains lock our cells in place in a new finding which could promote better cancer research and treatments in the future.

In a paper published in Nature Materials earlier this month1, the researchers identified the protein chain used in these tiny anchors, called focal adhesions, which link our body’s cells to collagen, another protein which gives our body structure.

This is the first time scientists have been able to see what these focal adhesions, used by cells in our bones, muscles, pancreas and more, actually look like. The findings expand our understanding of cell mechanics and could lead to new cancer research, targeting this protein to stop the spread of cancer.

While the anchors mostly keep our cells in place, if the cell turns into a cancer cell, the anchor can break, meaning the cell can float off and spread the cancer to other parts of the body.

PhD scholar Maria Lastra Cagigas, one of the study’s authors, said the team had identified the specific protein that upheld the connection between cell and collagen, and allowed these attachments to function.

“If these attachments fail, the cell could be more prone to moving and invading tissues, like cancer,” she said.

While common scientific knowledge was that cancer weakened these focal adhesions, it was extremely difficult to study the anchors to find out the mechanisms behind them because they were very thin, only a few nanometers across (around 0.0001 per cent the width of a human hair).

They revealed that a protein called tropomyosin was the key component in holding the anchor in place.

“This is the first time we can actually see in detail what the anchor’s chain looks like,” he said.

In order to identify the tropomyosin, the researchers first compared cells from healthy individuals to those from bone cancer patients as well as with lab-created cancer cells. They then inserted the tropomyosin back into the cancer cells and, to their surprise, the cells started to reattach.

Lastra Cagigas said this knowledge could be used to stop the spread of cancer cells in individuals in the future.

“In the short term, we could use this information to find out if a cancer has a predisposition to metastasize, which means to move throughout the body,” she said.

“In the long term, we could look into it as a potential target in cancer treatment.”

Professor Gunning and senior co-author Edna Hardeman called the finding a “milestone” in our understanding of cell mechanics.

“It reinforces what has essentially been a lifetime’s work for us: understanding the principles of the architecture of cells,” Professor Gunning said.

How cancer enters the matrix

Approximately 30 per cent of our body is made up of collagen, which is like a scaffolding found in our bones, ligaments, muscles and skin, Lastra Cagigas said.

“Other than the cells that move through our body, like those in blood, the collagen matrix forms the home for most cells — including cancer cells.”

A few cancers, like pancreatic cancer, can actually modify this matrix and create a barrier around the tumour, making it harder to for cancer treatments like chemotherapy and immunotherapy to get in and eliminate the cancer cells.

With the identification of tropomyosin, this protein could be a future target of cancer drugs which actually loosen the barrier and make them easier to treat with our standard array of therapies.

“We’ve identified that the type of protein involved in the chain, tropomyosin, is druggable,” said Professor Hardeman.

“This means it’s possible to develop small molecule inhibitors, or drugs, that can actually attack these proteins.”

No quick treatments despite landmark finding

However Professor Gunning noted that any treatments emerging out of these findings would not be available soon, even over the next few years.

“We have an understanding of the biology, but to go from that to treating a patient is difficult to predict,” he said.

“We can see what the path looks like, but we are less sure of the timeline.”

Instead, cancer research conducted into tropomyosin over the next few years could help scientists predict which cancers are more likely to spread quickly within the body.

“As we build on the underlying mechanisms of cancer and expand our markers of cancer cell biology, our discovery adds a missing link to the development of a personalised diagnosis for cancer,” said Professor Gunning.

Professors Gunning and Harding both run biotech firm TroBio Therapeutics which develops drugs targeting tropomyosin for various conditions. Although drug development was not examined in the paper, the firm may use the findings of this research for future products.