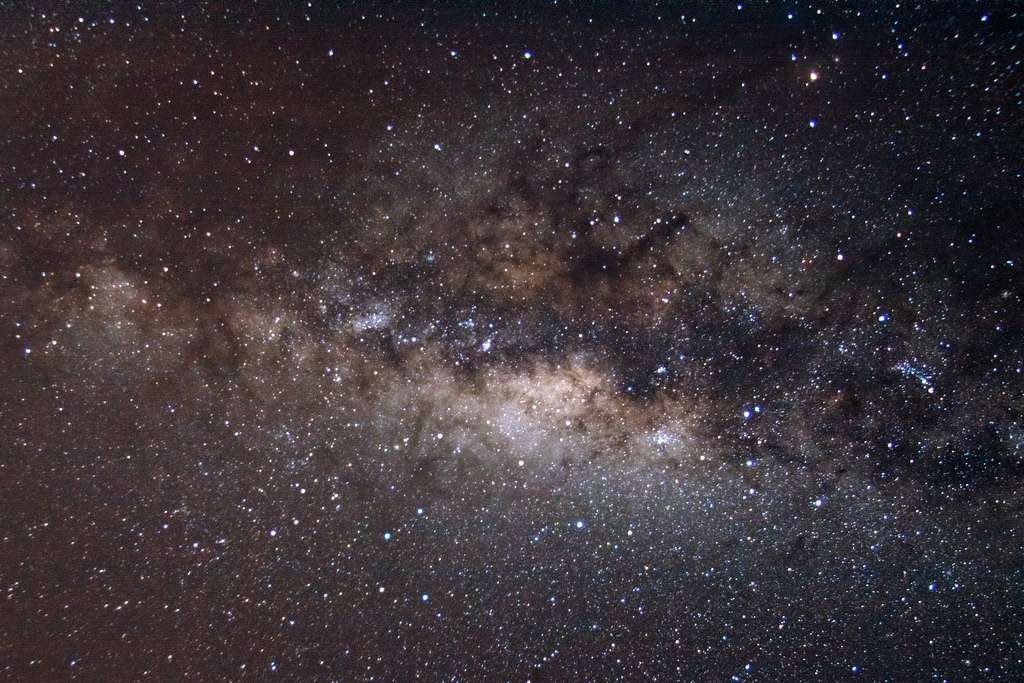 A sky-spanning survey of molecular gas clouds headed by Australian scientists could reveal secrets about the large-scale structure of the Milky Way, create better models of the Galaxy’s spiral arms, and reveal more on the origin of gamma ray sources within our galactic neighbourhood.

In the third release of the Mopra Southern Galactic Plane CO Survey, which made use of the 22-metre Mopra Radio Telescope near Coonabarabran in NSW, observations from 50 square degrees of sky were compiled together to present an illustration of the galactic arm structure and a preliminary catalogue of carbon monoxide gas clouds which will then be added to an even larger scan of data from the Milky Way. The patch of sky measured was around 250 times the size of the full moon, which takes up about 0.2 square degrees in the sky.

The team conducting the survey, led by Michael Burton and Catherine Braiding of UNSW’s School of Physics, used Mopra to measure carbon monoxide clouds floating around our Galaxy in order to determine the amount of molecular hydrogen, which is the most common element in our universe and is a vital ingredient in active star formation.

The survey will ultimately enable more galactic science, providing a wide swath of information on areas of interest which can then be probed more deeply by telescopes such as the Atacama Large Millimeter Array (ALMA), which can take higher resolution images than Mopra but with a narrower field of view, and the planned Cherenkov Telescope Array (CTA), a next-generation, ground-based, gamma-ray observatory. Both ALMA and CTA are located in Chile.

A roadmap of the galaxy

Gavin Rowell of the University of Adelaide’s High Energy Astrophysics Group participated in the survey and talked to Lab Down Under about the exciting discoveries that could emerge in the future as a result of the research.

One outcome of the survey was a better understanding of velocity and mass distribution across the galaxy, as it uncovered the Doppler shift velocity of gas features within the Milky Way’s spiral arms, Rowell said.

An everyday example of the Doppler shift is the change in frequency of the sound waves of an ambulance siren as the vehicle drives towards us and then speeds away. Mopra looked at this effect, measuring the changes in light waves of the gas clouds as they moved towards or away from us.

Because the Doppler velocity we measure is related to the distance from Earth, the survey effectively creates a three-dimensional model of the Galaxy. This can then be used to test different structural models to see which is most likely to be correct.

“With the Mopra data, we can start to compare models of spiral arm structure in the Milky Way, because our data is probably the most detailed measurement of gas at a large scale so far taken. We can use that to help constrain or update models of where the spiral arms actually are and so on and so forth. In that sense it’s quite useful for what we call large scale galactic structure studies,” Rowell said.

With this distance information, it is also possible to determine the true luminosity of the gas clouds as they are lit up by cosmic rays and other sources of radiation. True luminosity is effectively how bright an object is actually shining compared to how bright we see it from Earth.

Shining a light on gamma rays

The data will be and is also being used to determine the sources of gamma rays flooding our Galaxy, Rowell said. This is done by overlaying the gas maps from Mopra with images from telescopes such as the High Energy Stereoscopic System (HESS) and, in the future, CTA. These images show gamma rays which may be caused by cosmic rays smashing into galactic gas clouds. These cosmic rays are very high energy, charged atomic nuclei of atoms whizzing around in space at speeds very close to the speed of light.

“When cosmic rays hit gas in outer space, they effectively light it up in gamma rays – a bit like setting the gas on fire you might say,” Rowell said.

One motivation for Mopra was to measure the gas down to a reasonably fine detail to map the galactic structure and gain a greater understanding the origin of gamma ray sources already discovered across the Galaxy, he added. In some of these sources, the origin of the gamma rays is still unknown.

Rowell has already sent his PhD students into examining the survey data to see how specific gas structures overlap or wrap around each gamma ray source. One former student, James Lau, uncovered an unusual circular ring feature around the HESS J1614–518 gamma ray source which was discovered in 20051.

“It was towards a gamma ray source – we don’t know what the origin is – but there is a cluster of stars in the middle of the source and we found this gas ring almost surrounding this cluster of stars,” Rowell said.

The opening of CTA will allow even more exciting results from the Mopra data, Rowell said, because the telescope will create a much wider catalogue of gamma ray sources across the Galaxy, effectively creating this “confused mess of blobs of gamma rays” across the sky. While some gamma ray sources come from gas clouds, others don’t and so the data will enable researchers to differentiate the two.

“What we need to do is look at the gas clouds in three-dimensions and then try to match those gas clouds with all the sources. That will help us decipher or disentangle all the different gamma ray peaks and troughs and everything that we see in the gamma ray maps.”

The tools to delve deeper

The Mopra survey was able to delve deep into these molecular gas clouds by taking measurements of three isotopologues of carbon monoxide, 12CO, 13CO, and C18O. Isotopologues are molecules with different numbers of neutrons in their nuclei.

13CO and C18O were required to look deeper into these clouds, as the 12CO molecule only reveals surface details due to emitted light that is saturated and what is called “optically thick,” Rowell said.

“It’s a bit like if you look at a cloud in the sky. Those clouds are optically thick which means you can’t see through them. If you were to measure the brightness of a cloud in the sky, the daytime sky, you would only really see the outer layer of the cloud.”

By using the additional two isotopologues, more details are gained about the interior of the clouds which can then be used to gain a more accurate estimate of the amount of molecular hydrogen gas within.

The survey also measured the amount of carbon monosulfide, or CS, as yet another probe of the clouds’ inner depths.

“If we measure a signal from carbon monoxide, then we can basically measure the strength of the carbon monoxide and divide by the abundance ratio and that tells us how much molecular hydrogen there should be.”

For every 10,000 hydrogen molecules in the interstellar medium, there is one carbon monoxide molecule. This ratio is due to the chemistry that occurs within gas clouds and has been estimated to be relatively constant across the galaxy, Rowell said.

Data from the third release was collected during wintertime in Australia from 2011 to 2016, scanning for 12CO, 13CO, C18O and other proxy tracers using a technique called fast-on-the-fly mapping which enabled the telescope to quickly sweep back and forth across segments of the sky without losing too much necessary detail in the process.

The paper, The Mopra Southern Galactic Plane CO Survey – Data Release 3 was published in Publications of the Astronomical Society of Australia (PASA).

1 A Study of the Interstellar Medium Towards the Unidentified Dark TeV γ-Ray Sources HESS J1614–518 and HESS J1616–508, Publications of the Astronomical Society of Australia, December 2017