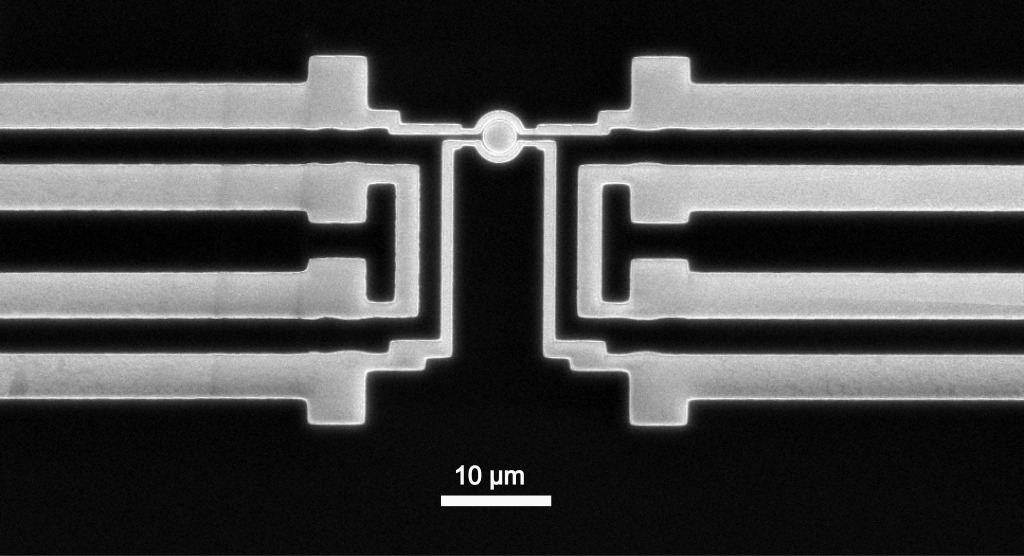 A team of physicists at UNSW has used a special kind of polymer in a unique way to create basic circuit components for hybrid organic-inorganic devices. These devices function using ambient humidity and may be a small step in developing improved signal transduction in future bioelectronic circuitry.

The researchers, led by Adam Micolich from the Nanoelectronics Group at the UNSW School of Physics, has created novel circuits using salt-free nanoscale poly(ethylene oxide) or PEO, a hygroscopic polymer which absorbs moisture from the air, successfully creating functional prototype hybrid protonic/electronic complementary circuits which a resultant paper published in NanoLetters called the “first step toward direct biological signal amplification and bioelectronic logic”.

A key challenge in bioelectronics is signal transduction, in which biological ionic/protonic signals are converted to electrical signals through an interface. At present, researchers are trying to develop methods of switching between the two signal types without losing fidelity, or the accuracy with which the signal is reproduced.

A project that gelled

Micolich’s team attempted to solve this issue through a new class of interface which combined PEO strips with traditional semiconductor nanowires and unexpectedly found the setup produced proton-to-ion transduction at frequencies up to 50Hz.

“It was one of those things that we just decided to give it a shot,” Micolich told Lab Down Under.

PEO was originally used by the organic electronics community for low-cost processing on cheap electrical components. Micolich’s team took that substance, in effect a soft gel, and tested what happened when it was used with nanowires on an extremely small scale instead.

However, Carrad came back with some outstanding results, saying he could etch PEO strips onto devices using electron beam lithography down to resolutions of 500 nanometres. As a quick size comparison, a red blood cell is about 7000 nanometres in diameter.

Presently, the team has been able to create simple circuit components with the polymer, including inverters, amplifiers and, more recently, PEO-gated field effect transistors (as seen below).

The paper theorises that the device is effective due to its high surface-to-volume ratio, essentially shrinking down the size of the polymer and increasing its surface area so that there is a higher rate of absorption of humidity from the surrounding air. As water gets absorbed into the PEO strips, some molecules self-ionise into a proton (H+) and a hydroxide ion (OH−).

“As far as we can tell having more surface and less volume actually makes this material work better. It’s not what you would expect,” Micolich said.

That the characteristics of the device change with humidity, i.e. that it almost stops working in a dry environment, would also lead to some interesting discoveries, he added.

“You could imagine doing things like looking at how the device operates as a function of humidity to try and understand, for example, how the swelling of the material and its gel structure influences the motion of ions.”

“In many cases, industries are a little bit like aircraft carriers – they’re very hard to turn around because they’ve got a lot of inertia and they don’t really like to change. So they often don’t get massively excited about these things unless they’ve got a problem they can’t break in which case they do start to care.”

These discoveries will instead be useful in less conventional spaces however which are more interested in new functions of nanoscale devices, he told Lab Down Under.

While currently the PEO strips can be used to make simple circuit components, a more challenging aim will be to make a device that measures ionic signals in a biological setting, Micolich said.

“A longer term goal would be to try and measure something that’s an ionic signal intrinsically – which would in principle be a neuron action potential or something like that – and then convert that into an electronic signal. That’s very much the direction we’re going at the moment. Basically the funding we have for that project going forward is to try and make such a device.”

If successful, these devices will be able to be integrated with conventional electronics to be used in signal recording, data transmission, and multiplexed transducer arrays.

However Micolich notes that the group has a myriad of challenges to overcome before this can even become a reality. Currently, the team is working on perfecting its amplifiers using the PEO material, which at the moment produce too much of a signal loss at high frequencies to be useful.

This was no good for measuring signals of neuron action potential which typically come out in the kHz range, Micolich said, with the team currently playing around with the material to get it working at this range consistently without too much trouble.

Biocompatibility is another crucial issue, he said, with the team conducting preliminary studies to see what the polymer’s effect is on cells when it comes in contact with them.

“If it turns out this material’s not very friendly in a biological environment, it can be the best signal transduction device on the planet but no one’s ever going to use it.”

Even with these challenges overcome, actually measuring the signals that come out of a single neuron and further developing the project from there would take years, Micolich said.

The paper is called Hybrid Nanowire Ion-to-Electron Transducers for Integrated Bioelectronic Circuitry and was published in NanoLetters in December 2016.

Featured image: Micro-ring. Picture by UCL Mathematical and Physical Sciences under the CC by 2.0 licence.