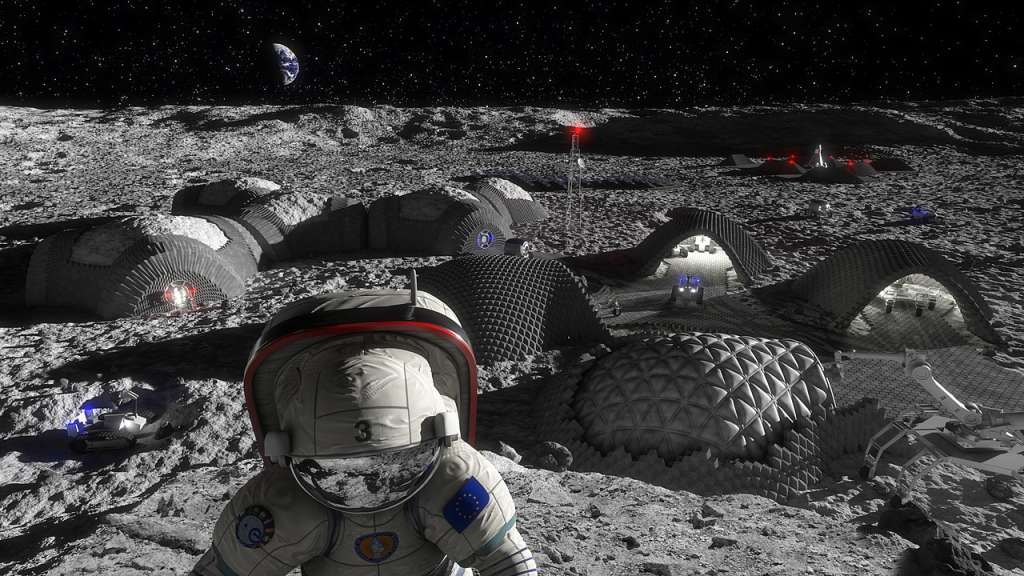 With humanity aiming to establish a lunar base in the next two decades, researchers have examined exactly how we could build critical structures on the Moon’s surface, suggesting the use of solar energy and cast regolith to achieve these goals.

In a paper due to be published in August in Construction and Building Materials1, engineers from the University of Adelaide found that cast regolith was the most “viable” option out of a range of building techniques available for expanding our footprint when we first create habitats, research facilities and more on the Moon.

While materials will likely be transported from Earth to create the initial stages of any lunar base, the prohibitively expensive cost of shipping (at around US$130,000 per kilogram) means it will be more cost efficient to conduct stage two of any construction using materials found on the Moon’s surface.

“As a result, the growth of lunar bases will only be sustainable and affordable with in-situ resource utilisation (ISRU), particularly to produce construction materials for civil infrastructure such as landing pads; roads; tunnel linings; thermal storage; dust mitigation; habitat shielding and equipment shelters,” the researchers write.

Lead author of the review, Kevin Farries from the Faculty of Engineering Computer & Math Sciences at the University of Adelaide, told Lab Down Under that using regolith was the obvious choice of building material because it was found basically everywhere on the surface of the Moon.

“The main reason it’s so important is that it’s really easily accessible and, for us as civil engineers, it’s there in the volumes we need to construct civil structures,” he said.

Regolith is a layer of fine particles which can be up to 15 metres deep found on the surface of the Moon. It is made up of dust and tiny rock fragments created through billions of years of meteorite impacts which have pounded the surface and gradually broken up the rocky material found there.

However, regolith also has a dark side as it is such a fine material, getting into equipment and posing health hazards for astronauts on the Moon, including in the Apollo missions which actually took US astronauts to the Moon between 1969 and 1972, Farries said.

“Regolith is one of the biggest challenges with operating on the Moon. In the Apollo missions, their spacesuits were reaching the end of their service life within a couple of days of being on the Moon because of it.”

Image of astronaut Buzz Aldrin’s footprint within the lunar regolith. Picture by NASA. Used in the public domain.

The two ingredients of lunar construction

With the Australian Space Agency located just across the road from the University of Adelaide and the university itself conducting trials into sintering regolith using laser cutters, Farries was prompted to conduct the review because critical aspects of developing lunar base design such as roads, landing pads and shielding had not received the attention they needed.

“I wanted to do a review of all experimental work that everyone had done so far and bring it together for everyone who’s looking at this at the moment,” he said.

The review focused on sintered or melted regolith, compiling data from 53 experimental studies conducted between 1973 and 2020 on lunar regolith simulants. Without melting the material, the process of sintering uses heat and pressure to fuse particles together.

Farries said he was inspired by German designer, artist and inventor, Markus Kayser who focuses on unique design and fabrication processes, including using the Sun’s rays to create objects out of desert sand.

“He did some stuff solar sintering in the Egyptian desert. And so I looked at what he’d done and thought that would be ideal for the Moon,” Farries said.

The advantage of sintered or melted regolith is that it only requires an energy source, the simplest of which is from the Sun, and the regolith itself from the lunar surface. The polar regions are especially attractive sites for a lunar base thanks to their almost continuous sunlight which could be tapped to power critical activities like sintering.

While larger components would be difficult to make using cast regolith due to the difficulties in controlling thermal stresses which will cause cracking, Farries said masonry was an option, with bricks of sintered or melted regolith used to build up a structure instead. However to do this, you would have to find a way to form a hermetic seal by welding together the blocks so that the pressure and air inside the habitat was not easily lost to the vacuum outside.

After examining the 53 papers, the researchers determined that cast regolith was the most viable method for transitioning a lunar base from its initial starting phase into a highly functional space where more complex construction methods such as refining specific metals from the lunar regolith could be utilised.

“A qualitative evaluation led to the conclusion that cast regolith is the most viable production method in the lunar context. Strong, dimensionally accurate structural units can be produced using simple, robust equipment that has been proven in structural and industrial applications on Earth,” the researchers wrote.

While sintering requires specific temperature control so the material does not crack, cast regolith is a simpler process where the regolith is heated until it melts, poured into a mould, and then possibly further shaped with some sort of press. This heating could be done through concentrated solar, microwaves or radiant heat, Farries told Lab Down Under.

“There’s a good chance that we can excavate moulds into the regolith. We’re hoping that you can excavate it, pour in your cast regolith and then cover it up. The regolith’s got very good insulating properties as well and it’ll cool down slow enough that it essentially undergoes passive annealing and doesn’t cool down too quickly to crack.”

Cast regolith could be used to build bases on the Moon’s surface or even within lava tubes, as has been proposed by other scientists2, Farries said.

“You’d still need your solar panels and landing pads outside and your roads to get into your lava tubes. And then even when you start constructing in the lava tube, you could build walls and flooring from this stuff. So the idea would be that the walls and flooring inside the habitat doesn’t need to be brought from Earth. You can make cast regolith tiles and blocks on the Moon.”

However, further research still has to be conducted on the cast regolith process which, for now, should look at how regolith simulants behave in a vacuum and at temperatures equivalent to the Moon’s when made into construction materials such as bricks.

This would increase what Farries called the “technological readiness” of cast regolith to be used on the Moon.

“We’re trying it out now under fairly good simulations of the conditions on the Moon. But to boost technological readiness, you really do need to be either running trials in a vacuum or you need to show that the vacuum doesn’t significantly affect your results. And so to do that, at least a few people need to try it in hard vacuum to make sure that nothing happens that wasn’t foreseen,” he told Lab Down Under.

Presentation by Kevin Farries on the University of Adelaide Construction Group research into sintered or melted regolith for construction of lunar base civil infrastructure. Used with permission.

Simple feats on Earth made challenging on the Moon

Other aspects of the construction process also needed to be examined further, Farries said. For instance, if one were to use laser energy for sintering on the Moon, functional necessities such as cleaning the lenses and making sure the moving parts are not jammed with regolith dust are also essential considerations.

Even something as simple as placing masonry created through sintered or melted regolith seems to be a challenge with Farries describing the difficulties he had attempting this on Earth with a little Raspberry Pi rover.

“I used these osteomorphic blocks. A three-year old could stack these. They’re shaped in a very clever way, almost like a sine wave or cosine wave. So what happens is when you drop them, they drop into the correct position and so they’re self-aligning. So it’s quite clever the way they work and they’re really suited to automation. But what you realise is that for automatic construction, you really need depth of field and a self-awareness of where things are.”

Automation was something that people frequently talked about when it comes to constructing a lunar base — sending rovers up to create structures before humans arrived — but this also has its challenges, Farries said.

“There’s a lot of talk about how you automate everything but in actual fact if automation worked better than people you’d be doing it on Earth. Actually automating these processes is very difficult and even remote ops is very difficult, so you’re going to have at least some kind of human presence there when the unexpected happens to make repairs and all that sort of thing.”

For this reason, Farries explained that we could initially ship the whole habitat to the Moon, along with people, and then use something like cast regolith to further expand the base, for example extending the living quarters or building shelters for equipment.

“Then when you go beyond that, it will go beyond my research. You’ll get to the stage where you’re refining metals on the Moon, so you know you’ll no longer need to try and work with the regolith. And so each technology will have its heyday.”

New technology developed for the Moon could also be brought back to Earth and used here, Farries noted.

“Civil engineering is such an old area of study but working in space opens up whole new lines of thinking. And who’s to say we couldn’t bring some of that back to Earth? If you can make a decent construction material just using the Sun and a mineral like regolith, there’s no reason why you couldn’t just bring that to Earth and do the same thing here. You’d get a sustainable material,” he said.

If you would like to find out more about Farries’ research, you can check out his ResearchGate profile, Google Scholar page, and LinkedIn feed.

Featured image: A vision of a future Moon base that could be produced and maintained using 3D printing. Picture by the European Space Agency. Used under the Creative Commons Attribution-Share Alike 3.0 Unported license.