Pulling back the curtain: How one global astrophysics team is seeking out space’s more elusive objects 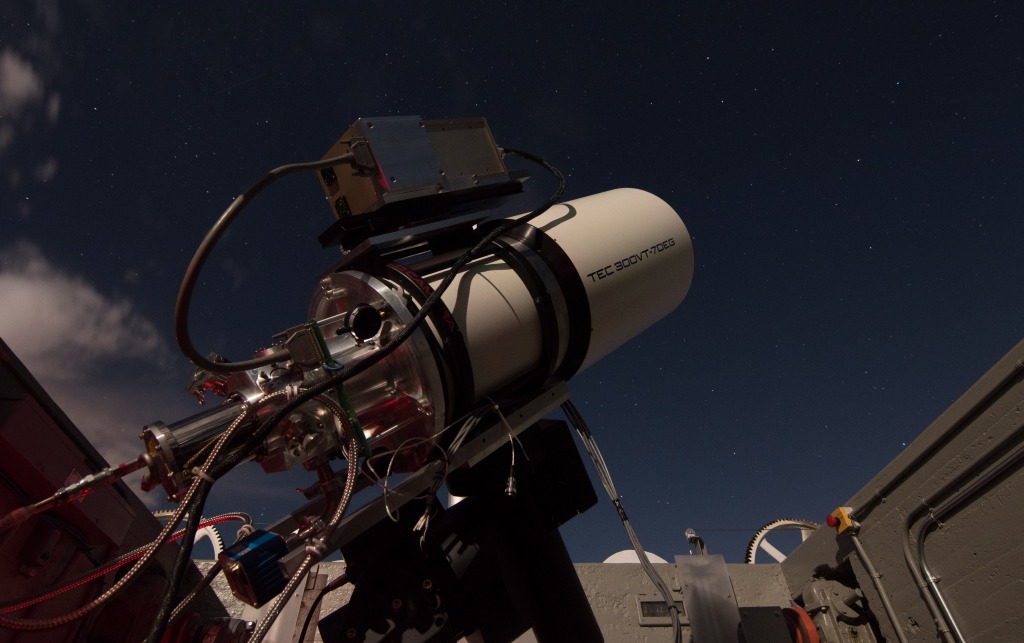 The universe can be stubborn, only unveiling its secrets to those with the tools to see beyond the optical light that our own eyes can see and onto “invisible” light from other parts of the electromagnetic spectrum. One global team of astrophysicists is breaking new ground in exactly this area, creating a series of Earth-based, wide-field telescopes which will, for the first time, explore the universe in the infrared by seeing large swathes of sky all at once.

In a paper, entitled Opening the Dynamic Infrared Sky published in the Proceedings of SPIE in July last year, the team led by Anna Moore of the Australian National University and Mansi Kasliwal of Caltech sets out a plan, already in motion, for three near-infrared telescopes that will focus on transient objects such as gravitational waves, theorised infrared counterparts to fast radio bursts, and newly discovered SPRITEs, by using a combination of technology which, while available for use, has been so far overlooked by the scientific community.

These types of tools are crucial in exploring more of the universe and locating previously undiscovered objects, said Professor Michael Ashley from the University of New South Wales who is also involved in the project.

“If you don’t look, you won’t see it. It’s a big mistake just to rely on theories to guide you with what you should see because that means you’re not exploring whole regions of parameter space where there could be interesting objects which you just don’t expect,” he told The Lab Down Under.

A Primer on the Electromagnetic Spectrum

The electromagnetic spectrum is the complete range of radiation that floods our universe. It spans from high energy gamma rays and x-rays through to ultraviolet light, to the narrow band of visible light that humans can see with our eyes, onto infrared and then through to the lower energy microwaves and radio waves.

Each of these types of radiation represents different wavelengths and frequencies of light. The smaller the wavelength and the higher the frequency, the higher the energy of the light wave. Wavelengths for visible light fall into the 400 to 700 nm range (the distance from crest to crest of each light wave) while infrared is less energetic at 700 nm to 1 mm (or 1,000,000 nm). Near infrared, the focus of the SPIE paper, falls at the end of the spectrum closest to visible light at 900 to 2,400 nm.

The ultimate aim of the project is to overcome two “roadblocks” that have prevented the widespread use of infrared telescopes: the Earth’s general bright sky background which can obscure light coming in on the infrared range and more limited field of view of current infrared telescopes.

Up until now infrared cameras, which are more expensive than optical, have been placed on larger telescopes which only offer a narrow field of view, Ashley said. While current infrared cameras have mostly been developed by the military with little effort to make them commercially viable, the project is raising funds for a series of infrared cameras to be installed in customised telescopes in the US, Australia and the polar regions, he added.

“What we’re doing is putting an expensive camera on a small telescope, and that’s something that people haven’t usually done. In fact no one’s done it before, so it really opens up this new area of parameter space where we’re looking for the sorts of objects which would have escaped detection up til now.”

An eye on the unseen

Objects to be explored by this new network of telescopes include a newly discovered class of “explosive transients” called SPRITEs (eSPecially Red Intermediate Luminosity Transient Events) which don’t have counterparts in the visible light part of the spectrum.

SPRITEs were discovered by Kasliwal. They are objects that appear for days, weeks or months in the infrared – all relatively short timeframes in cosmic terms.

“We don’t really know what they are,” Ashley said.

The proposed infrared telescopes could also be used to examine RR Lyrae stars: older stars about half the mass of the Sun which oscillate, getting larger and smaller, due to the stage of their evolution. These can be used as “standard candles” to measure distance in the cosmos as their oscillation frequency relates to their absolute brightness.

“The reasons we’re interested in doing this in the infrared is it means you can find objects towards the galactic centre and in the galactic plane to much further distances which are not obscured by dust that stops the optical light. We can see these objects a long way away and get a handle on the evolution of the galaxy,” Ashley said.

Fast radio bursts, millisecond long flashes of radio waves that occur randomly across the sky without repeating, are another phenomena which may be explored by these new telescopes. Theoretically these flashes could also show up in the infrared as well as radio, Ashley said, which is what these wide-field telescopes are designed to have a higher probability of spotting.

Finally, the telescopes are hoped to be used in the further exploration of gravitational waves with the knowledge that sources of these waves, such as neutron star collisions, typically peak in the infrared and may not be detectable in optical wavelengths.

“We may have a whole class of gravitational wave events which are only visible in the infrared. We just don’t know. In general, infrared is a good bet because it’s not obscured by dust so much, so it can be visible when normal optical radiation isn’t,” Ashley said.

The group plans to install three wide-field near infrared telescopes in the US, Australia and the polar regions to provide better viewing of this range of the electromagnetic spectrum. Each of these telescopes will build on the capabilities of those prior, creating a near infrared network which will eventually be able to spot objects across the band, scanning the entire observable sky every few days.

The first of these telescopes, Palomar Gattini-IR, has already been built, commencing operation in September 2018 at Caltech’s Palomar Observatory in California. It is a 300mm telescope with a single infrared camera focusing on the 1,250 nm band, the darkest infrared band at this sort of temperate location.

A second telescope, Dynamic REd All-sky Monitoring Survey (DREAMS), is partially funded and under construction at the ANU’s Siding Spring Observatory in NSW, Australia. This will be a 500mm telescope that will focus on three infrared bands – 1,000 nm, 1,250 nm, and 1,650 nm – through a custom made camera/telescope combination to further expand the capabilities of the Palomar device.

The third telescope, Turbo Gattini-IR, is planned for a future date in the polar regions at an as yet unnamed location such as Canada’s Ellesmere Island in the High Arctic or the South Pole station in Antarctica. This device, once funded and built, will include four separate telescopes on a common mount that adds a fourth band at 2,300 nm to take advantage of the atmospheric conditions at these polar sites.

The SPIE is the international society for optics and photonics and is a not-for-profit organisation. Financing for the tri-telescope project comes from an ANU Future Fund and an Australian Government Research Training Program Scholarship.

Featured photo by Dr Scott Adams, astrophysicist at the California Institute of Technology.