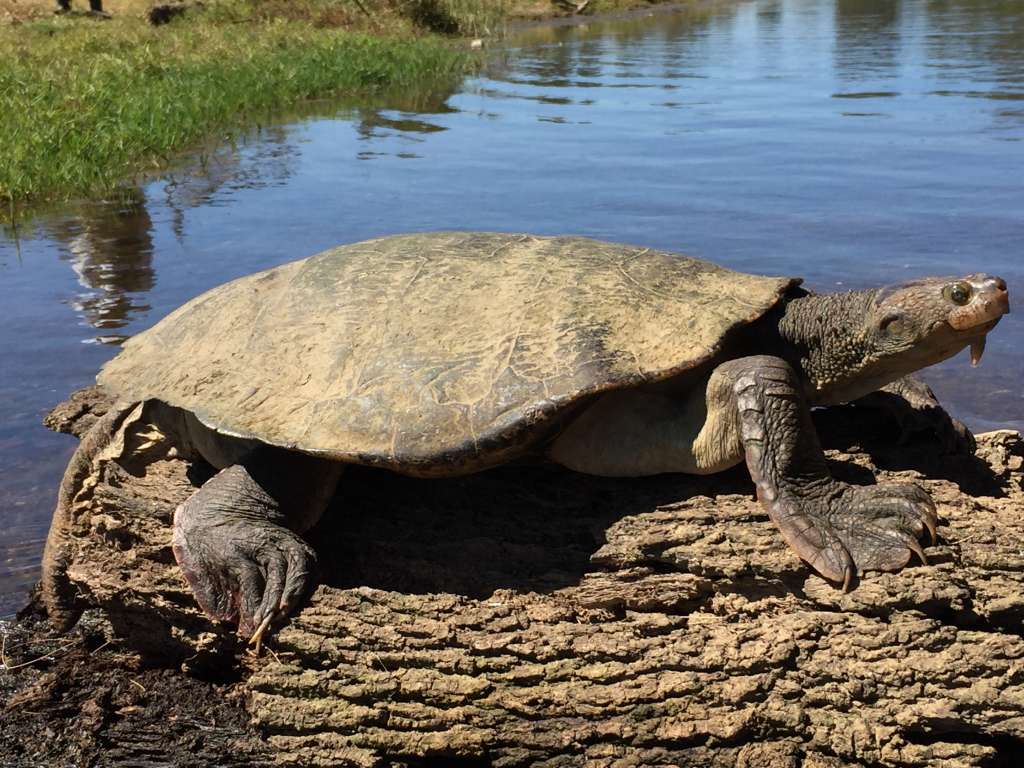 While nest protection seems an obvious way of ensuring more turtles survive, a new study on the Mary River turtle has found that, on its own, the conservation method is not as efficient as first thought and that threats to these animals until they reach 15 years of age are still keeping population numbers down.

The turtle is found in the Mary River in Queensland. It is often known as the ‘punk rocker’ turtle because some individuals grow green mohawks of algae on their heads. Facing many threats and with the survival of the species at risk, conservation efforts have been launched through collaborations with councils, universities and the Tiaro & District Landcare Group.

A new paper1, conducted by Charles Darwin University and Tiaro Landcare Group, looked at nest protection programs of the Mary River turtle. The scientists found that although the programs helped more hatchlings survive, they did not ultimately boost the number of older turtles found in the river when compared with areas that were not protected by these same methods.

While these results do not mean that nest protection programs are a fruitless exercise, they point to a need for expanded conservation programs that protect turtle populations in other life stages when the animals are found in-stream, co-author of the paper Marilyn Connell told Lab Down Under.

Connell conducted the study as part of Charles Darwin’s Research Institute for the Environment and Livelihoods and has managed the Mary River turtle conservation project with Tiaro & District Landcare Group since 2002.

The Mary River turtle (Elusor macrurus) was only scientifically discovered in 1994, although it would have been known by Indigenous Australians for a long time before that, Connell told Lab Down Under. That such a large species — Mary River turtles weigh around 8 kg — remained out of sight for so long was a surprise, Connell said.

“The Mary River is not really remote. We’re only two and a half hours north of Brisbane on the east coast, on the Bruce Highway. We’re not isolated which makes it even more unusual to find a species this large. Internationally, it was quite significant.”

The turtle had remained out of the scientific eye for so long because it was elusive, Connell said. One reason for this is it is a cloacal ventilator. This means it has the ability to breath and extract oxygen from the water through a specialised gill-like structure in its anus, and does not have to surface that often. Secondly, turtles are commonplace so a new species could easily be overlooked and hiding in plain sight, Connell said.

After learning about the turtle, the Tiaro Landcare Group commenced the nest protection program in 2002, enlisting the assistance of scientists from a number of universities to gain peer-reviewed insights into the animal.

“Because it was such a new species, we felt it was really important to actually learn peer-reviewed facts about this species and understand it to inform management and conservation. To date, there have been about 18 different papers published in scientific journals as a result of the support that Tiaro Landcare Group has provided,” she said.

While the nest protection programs reduced the mortality of the hatchlings, Connell said that one question, now answered in this latest paper, was whether these programs actually had an impact on the whole population.

In order to better monitor populations of the long-lived turtles on the Mary River, the researchers examined 43 captured turtles, developing a way of estimating their age over a three year timeframe which was much faster than the typical 20 years or more which were previously required. This faster timeframe is important to allow conservationists to track turtle populations in difficult conditions.

“You can make assumptions about what the results of your programs or management activities are but unless you’ve got a reasonably efficient, practical and fast way to assess them, people just don’t do it because it’s so hard to get resources to do surveys over a long period of time,” Connell said.

“No one wants to pay for that and PhD or masters students are all on board for two or three years. It’s just not practical to do things over a long period of time which is obviously much more thorough but is less achievable. But you can’t just use that as an excuse not to do some sort of monitoring and evaluation.”

With the right tools for assessment, conservationists become aware of what’s really happening as a result of their programs and can make adjustments as needed, Connell told Lab Down Under.

Threats from trade and predation

The Mary River turtle is endangered throughout Australia. Adults have a shell of up to 430 mm in length and are found in the Mary River in a region spanning from the Sunshine Coast Hinterland in the south up to the tidal reaches of the river just north of Maryborough.

During the 1960s and 1970s, hatchlings were illegally caught and sold into the pet trade. These days however, eggs and nests are under a different type of threat from predation by goannas and feral animals such as foxes as well as being trampled by livestock. Typical methods to stop this involve fencing nest areas off to block access to cattle, protecting individual clutches with mesh and working with councils to reduce feral animal numbers.

Video: Nine news story on plan by councils and the Tiaro Landcare Group to save the vulnerable Mary River turtle from predators.

While the turtles are long-lived, no one knows precisely how long they live for and estimates have had to be made of when the turtles become sexually mature. Connell told Lab Down Under that this could be anywhere from 15 to 40 years after the turtles hatch. One of the oldest turtles ever caught on camera was estimated to be around 100 years old.

Trying to find the bigger picture

What is obvious from the research is that nest protection by itself does not protect the Mary River turtle population and allow it to grow. This is because the in-stream threats that the turtles face as they mature can still decimate numbers if not controlled or monitored. Connell said that while the findings related to the Mary River turtles, they could be extended to other species of turtles throughout the world.

“You can address one part of the turtles’ life history and reduce the threat to that successfully, but that won’t result in the anticipated increase in the population of the immature phase. So you can see good results but it’s only one part of the picture,” she said.

“Trying to find out the rest of the picture isn’t that easy because you can’t just walk along the bank of a river and see what’s happening. Rivers are dirty, they’re big, there are lots of things happening in there. What’s going on? It’s likely to be multiple things.”

However, Connell stressed that nest protection was still a useful conservation measure because without it, hatchling mortality would increase to around 90 or 100 per cent.

“So we know that there is a serious issue for freshwater turtles and survival of the egg or predation of the egg in the hatching phase. So that does need to be addressed. Our study says though you can’t assume that because you’ve addressed one threat and one phase of the life history of the species, that it’s fixing up the rest.”

Searching for an unknown threat

Connell and her team are now trying to see what the in-river threats to the Mary River turtle actually are. One hypothesis is that the forktail catfish (Neoarius graeffei), which grows to 750 mm long and has a mouth of 120 mm wide, is responsible for the decimation of turtle numbers in the river.

“So they’re obviously going to be shovelling up little turtles, fish and other species. This is our hypothesis and we’re yet to prove it,” she said.

“Is the same threat common to all species? We don’t know. It may be, so what we find out for the turtle may have consequences for other species even within this one catchment as well as elsewhere in Australia,” Connell said.

The key thing moving forwards was to have science and research actually inform the management and survival of these species, she told Lab Down Under.