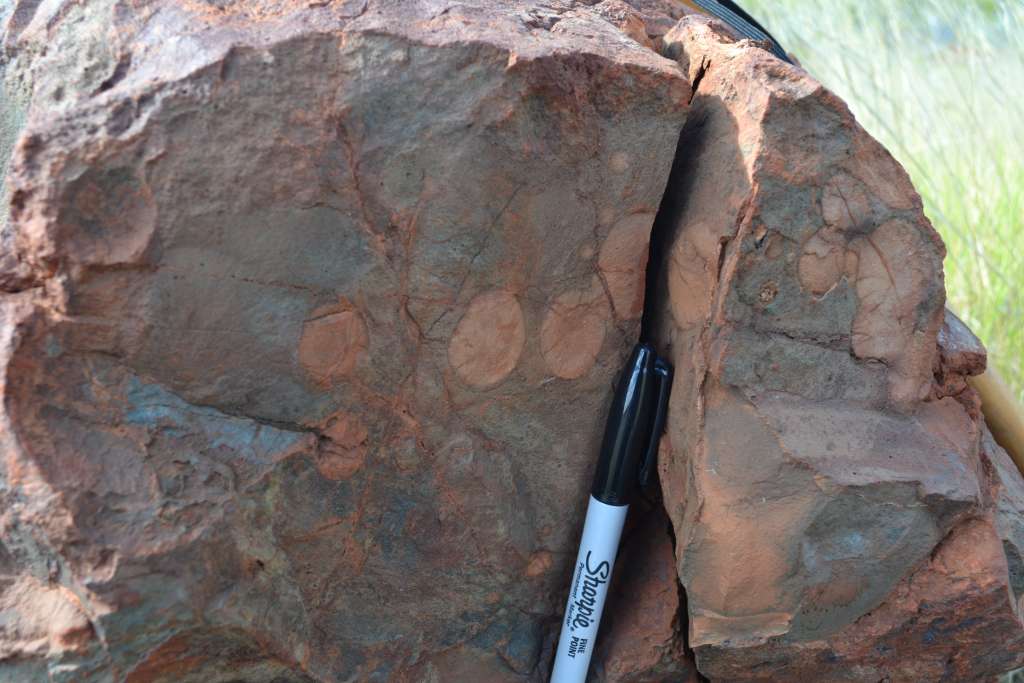 Analysis of rocks over three billion years old found in remote northwest Australia have provided tantalising clues as to ancient volcanic processes that heaved and shaped the Earth in the long distant past.

In a paper1 to be published in Precambrian Research in June, a team of Australian scientists examined rare specimens of rocks sourced from the Pilbara region of Western Australia which have remained mostly unchanged since they were formed between 3.2 and 3.6 billion years ago.

The rocks are formed from a type of lava which can be seen erupting out of volcanic vents even in the present day and which hardens to form rocks such as basalt with particular features depending on whether the eruption occurred on land or at sea.

The unique properties of these ancient rocks may reveal the dramatic changes that occurred across the planet billions of years ago, with scientists hypothesising that the rocks were formed by volcanic processes in an ocean kilometres deep at a time relatively soon before those same areas were uplifted to only a few hundred metres of water.

The watery world of the Paleoarchean

Lead author Dr David Murphy of Queensland University of Technology’s School of Earth & Atmospheric Sciences told Lab Down Under that by examining the mineralogy and chemistry of ancient rocks, we can tell how the Earth behaved and how this relates to geodynamic processes billions of years ago.

The particular rocks sourced from the Pilbara were created in what’s known as the Paleoarchean, a time period which occurred from 3.2 billion to 3.6 billion years ago, and are some of the oldest rocks on the planet.

“There are a few possible rocks that might be around four billion or slightly older but almost everything that existed on the Earth before that has been removed by cycling and mixing due to the geodynamic conditions that occurred at that time,” Murphy said.

Such Paleoarchean rocks can be found in a number of areas worldwide, including the Pilbara Craton in Australia and Kaapvall Craton in South Africa. The vast majority of surficial rocks from this time period are volcanic rocks, Murphy said.

“That is essentially because at that time in Earth’s history there was very, very little evidence of land. There were very few indications that any continent or continental material present at that time was actually above the ocean, so everything was essentially sub-marine.”

During the Paleoarchean, the Earth essentially looked like the water world visited by the heroes of the sci-fi film Interstellar, Murphy added.

“So the very early history of the Earth would have looked very similar to that with small islands potentially sticking out of the ocean. So it really does imply that there were very different conditions at that time.”

Bubbly rocks via volcanism past and present

The rocks studied are similar to a type of basalt which can be also found forming in modern day volcanoes in active locations such as Iceland and Hawaii. Most of today’s eruptions occur underneath the water, Murphy said, especially in areas called the mid-ocean ridges which are found 2,000 to 3,000 metres below the surface.

“In those scenarios, you get pillow lavas. It’s almost like the lava squirts out of the vents like toothpaste coming out of a toothpaste tube. And so it forms long, elongated strings. But when you see them commonly, you’ll see them cut across at right angles and then they kind of look like stacks of pillows.”

Pillow lava can also be quite bubbly on its surface as the gases within, which can include water vapour, carbon dioxide, carbon monoxide and sulphur dioxide, basically emerges out of, or exsolves off of, the magma.

“All that gas was dissolved in the magma when it was under pressure. Then when it comes up to the Earth’s surface, it’s a bit like opening a can of carbonated drink as it suddenly gets released,” Murphy said.

The properties of pillow basalt from the Paleoarchean indicates that they also were formed from volcanic activity that occurred in water, with scientists able to compare these older specimens with present day rocks formed from sub-marine volcanoes.

However, the pillow basalt in the study picked up from the Pilbara also contains what are called varioles, bright splotches of rock within the darker basalt (see the featured image), that are rarely found in their modern day counterparts, Murphy said.

“They’re a very, very uncommon feature in modern day basaltic magmatism, but they’re actually quite abundant in the Archean equivalent. So it suggests that there was a significant difference between the process of formation of these pillow lavas from the Archean and the pillow lavas that form in the present day.”

Murphy and his team hypothesise that the varioles actually show that these Paleoarchean pillow lava erupted from water that was quite deep and at high pressure.

“Now this is very much a working hypothesis and it needs some significant experimental work to really verify but we’ve hypothesised essentially that these pillow lavas are erupting in water that is super deep and that’s actually suppressing the de-gassing of the magma,” he told Lab Down Under.

So instead of bubbling off as a gas, the high pressure ocean environments would squeeze these gases down into a liquid within the magma. Chemical exchanges would then occur which ultimately formed the colouration and texture found in these splotchy rocks unearthed billions of years later in the Pilbara.

If this hypothesis is verified, Murphy said that scientists could then estimate how deep the water was at the time these variole-bearing rocks were made in those ancient times.

“In the ideal case, we’d like to do actual physical experiments where we make magma and then put it under pressure to see if this phenomenon actually occurs in a laboratory setting. We’d then be able to use those numbers to say how deep the ocean would have been in that time period,” he said.

“I think that would be a really cool tool to be able to demonstrate so I think I’m going to have to go and talk to some experimental scientists and try to persuade them that it’ll be worthwhile.”

Picture: A stack of pillow lavas from the Warralong greenstone belt. Image by Dr David Murphy. Used with permission.

By being able to make inferences about water depths in this way, scientists could see how the Earth actually changed over time, Murphy said.

“If it’s correct, and it is very much a hypothesis at this point in time, then you can make observations of these types of lavas to effectively make inferences about water depth but also environment and even environmental change.”

What is interesting was that there were other rock types occurring in approximately the same time period called stromatolites. These are interpreted to be algal mats, possibly from the ancient ancestors of blue-green algae, which were formed in shallow water when the algae was photosynthesising, Murphy explained.

“What that indicates is that in the time period from when the variole-bearing rocks were erupted to when the stromatolites formed, it went from a very deep ocean environment to a very shallow environment.”

This suggests the land surface was raised within a relatively short geological timeframe of around 10 million years, going from an ocean that was kilometres deep to a shallower sea of around hundred metres deep.

Video: Lab Down Under video interview with Dr David Murphy

The mystery of the water-rich magma

Analysis of the chemistry of the variole-bearing Pilbara rocks allows for the inference to be made that they had high concentrations of water and volatiles such as carbon dioxide. This high water content had further implications for how these rocks would have been formed all those billions of years ago, Murphy said.

Our present day planet is ruled by plate tectonics, where vast slabs of solid rocks called plates slide over the ductile mantle underneath. The movement of these plates drives most of the volcanism of our modern world as plates pull apart from and crash into each other.

However Murphy said that prior analysis of Paleoarchean rocks failed to show that plate tectonics played the same role in ancient Earth. In fact there has been no evidence that the rocks uncovered thus far had been produced by the movement of plates at all.

“It’s a big debate in the literature. Is there evidence of plate motion in this time period? Or was everything stagnant and not moving relative to each other?” Murphy said.

The fact these Paleoarchean rocks were water rich however meant that the water had to somehow travel up to 100 kilometres deep to get into the upper mantle where it was mixed in with the magma. Presumably this water came from the surface which was covered in oceans and was the “obvious” source, Murphy told Lab Down Under.

However, whether this water was being dragged down into the mantle through the movement of plates, such as what occurs currently, or it moved there through some other process was not clear, Murphy said.

“So currently I don’t think the exact geodynamic setting that these rocks were formed in is obvious, but it adds to our understanding of the environments at this time. This allows us to then start building models and think about why such rocks occur,” he told Lab Down Under.

“And then these observations can be built into numerical computer modelling of the Earth in that time period to start making more predictions about what we should see in the field. So field observations about the mineralogy and chemistry of the rocks feeds into the numerical models and then that creates hypotheses to test when we go out into the field.”

Further information on Dr Murphy’s research can be found on his personal Twitter feed, his ResearchGate profile, the QUT website, his Google Scholar webpage, and his articles for The Conversation.