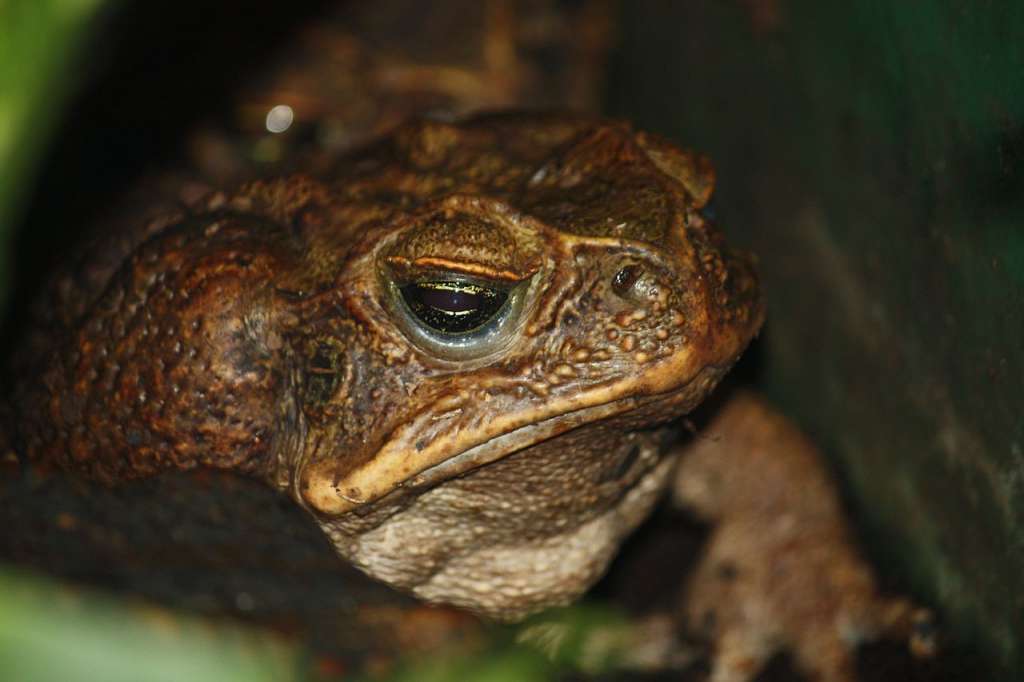 Cane toads have the ability to lower their stress hormones when colonising harsh environments, according to new findings by Australian researchers which suggest that these invasive amphibians may be able to resist the detrimental effects of climate change a lot more effectively than many other animals.

The University of Sydney and Macquarie University study1 looked at cane toads, which are native to South and Central America but which are now a pest endemic to northeastern Australia. In particular, the scientists examined the response of toads to different temperatures and humidity levels in the lab.

The overall finding was that cane toads found in Australia produced lower levels of stress hormones in response to hot or dry environments than their Brazilian counterparts. This adaptation suggests that Australian cane toads can cope with harsher environments to a greater degree than toads which had never left their native South American habitat in the first place.

Stressors for a toad invader

Gregory Brown, a post doc at the Department of Biological Sciences at Macquarie University said the paper was part of a large-scale research project aimed at examining how cane toads have changed during the course of their invasion of Australia.

“Cane toads seem to have a remarkable ability to rapidly adapt to environmental conditions that are vastly different than those it evolved under in South America. They have behavioural and physiological mechanisms that can help buffer against changes in climate,” he said.

Cane toads were introduced into Australia in 1935 to control destructive cane beetles that were decimating sugar cane crops in northern Queensland. While around 100 cane toads were brought to Australia and bred to make the 2,400 which were eventually released, this number has exploded in the decades since then with an estimated 200 million cane toads now living in the country’s northeast.

“CORT and HSP70 are both biochemicals that the body releases in response to stress. CORT is a hormone that is ready to activate a bunch of metabolic and immunological responses in case any injuries eventuate. HSP70 has a role in minimising tissue damage. You can quantify both chemicals fairly easily from blood samples,” Brown said.

Adapting to harsh settings in the lab

Toads were collected from two sites in Brazil and eight sites in Australia (in Queensland, WA, NSW and the NT) and blood samples were taken in labs at the University of Sao Paulo and Charles Darwin University.

“We took a baseline blood sample from all the toads at the beginning of the experiment and then assigned them to one of three temperature treatments (15°C, 25°C, 35°C) and one of two hydration levels (100 per cent hydrated or 70 per cent hydrated). After several days under these experimental conditions, we took another blood sample and compared levels of CORT and HSP70,” Brown said.

The toads were kept in 20-litre plastic containers and fed on crickets, cockroaches and mealworms until the day before the experiment began. The toads were not given any more food so as to maintain their body mass during the experiment, and the temperature and available water was varied on a random basis.

The findings for HSP70 were “clear cut”, Brown said, since levels in Brazilian toads were twice as high as toads collected from Australia. Toads from Brazil also had higher CORT levels, he added, however this overlapped with toads from some parts of Australia.

When cane toads were relocated to Australia, they were exposed to an environment that was more variable and harsher than that which they experienced in their native habitat. Responding to this challenge, the toads would have initially increased the level of stress hormones such as CORT and HSP70. However, this “up-regulation” would have come at a cost, with higher levels of CORT increasing a toad’s rate of desiccation and lowering its chance of survival in dry conditions.

The fact that levels of CORT and HSP70 were lower in cane toads found in Australia matched a prediction made by Brown and his colleagues the level of these hormones would have dropped as the toads adapted to the more extreme conditions.

Changing in a myriad of ways

While it was “tricky” to extend the results of lab studies to how animals behaved in the wild, Brown said it was safe to assume toads in Australia were more likely to have encountered harsher environments than those in Brazil.

These results validated a wider picture emerging from other studies that Brown and his colleagues had also conducted on cane toads.

“The studies documented numerous ways that toads had changed over the course of invasion — behaviourally, morphologically, ecologically, and now physiologically. This study found that dehydration is more of a stressor on toads than temperature is. But I guess that’s not too surprising since amphibians are typically more reliant on water than reptiles are, for instance.”

These other papers presented a range of findings on how cane toads adapted when relocating to Australia. For instance, while cane toads in Australia had thinner skin than those in Brazil, the layers that regulated water exchange were thicker2. Cane toads in Australia were also able to remain cool more efficiently in hot conditions3, had better sprint speed and endurance4, and spent more time with other cane toads than alone5.

“No matter what toad traits we look at, we find differences between invasive populations and range-core/native range populations. Trying to understand how the differences arose is the hard part,” Brown said.

Further adaptation in a changing climate

Cane toads had proven “remarkably adept” at invading Australia and thriving in conditions that were very different to those they evolved in, Brown said. This means cane toads may also be able to adapt further as climate change further alters the environment in which these animals live.

“It’s possible that under further climate warming some places may become too hot or dry for toad populations to survive. On the other hand, warming may allow the toads to expand into regions of southern Australia that are currently too cool for them,” Brown told Lab Down Under.

“Toads are quite generalised as far as amphibians go, and thrive in disturbed habitats. So they can withstand a lot of climatic and landscape perturbations that would severely threaten more specialised species.”

As for further research, Brown said it would be useful to understand the mechanisms underlying the toad’s ability to survive and thrive in harsher environments and examine the costs associated with these physiological changes.

“Life history theory says that if you develop some mechanism that makes you better able to cope with a changed condition, it comes at a cost to something else, like growth or reproductive output,” he said.