A rot and a hard place: New material discovered in Tasmanian forests 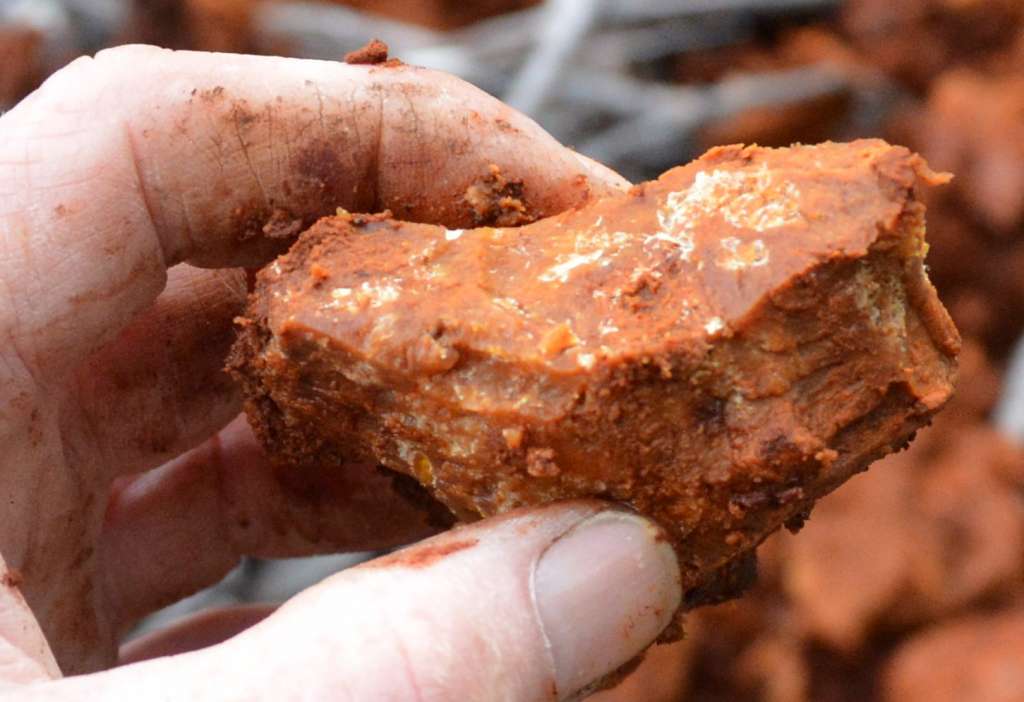 A new organic substance has been discovered in the old-growth forests of Tasmania, giving scientists a window into how trees decompose that may possibly lead to better pollution removal or hydrogen storage options in the future.

The substance, called cunnite, was uncovered in the central lower trunks of large, mature myrtle beech trees that were being logged in Tasmania. It is a hard, brittle, black material that originates from the trunks of these rainforest hardwood trees, most likely from brown rot fungi which breaks down cellulose in wood.

A chemical analysis of the substance, conducted by scientists working with Dr Christopher Dean of the School of Technology, Environments and Design at the University of Tasmania, found that cunnite was high in a material called lignin that is of great interest in the material science community, and that its potential porosity may lead to further practical applications if progress is made on producing it synthetically.

Dr Dean talked with Lab Down Under about his subsequent study1 on cunnite, discussing topics such as the importance of further studying these old-growth forests before they disappear, why cunnite itself was so important, and why it had taken so long to stumble upon this new material.

The cheese of the forest

What the researchers found was a hard, brittle substance that was longer lived than any of the surrounding material in the trunks of the myrtle beech trees in which they were located.

In the paper, Dr Dean differentiated between two types of the material: a wetter form called cunncaseus (combining cunnite and caseus, the Latin word for cheese) and the drier cunnite. The name cunnite itself is derived from the Latin name of the myrtle beech tree it came from, Nothofagus cunninghamii, and the suffix -ite to indicate its rock-like appearance, hardness and stability .

A sample of cunncaseus can be seen in the image at the top of this article.

Both of these forms shatter in what is known as a conchoidal fracture similar to the curved surface fractures one sees when glass or obsidian break, Dr Dean said.

“The conchoidal fracture persists down to the microscopic level. This fracture type is there in the wet, freshly decomposed cunncaseus and in the aged, dried cunnite too. It indicates isotropic (multi-directional) bonding.”

Bonding simply refers to chemical entities in a substance joining together or linking up, although this can occur in a number of different ways.

A substance not predicted, unexpected

What was new about cunnite was that this was the first time that molecular fragments had been seen to re-bond and possibly even re-polymerise to form a new substance after decomposition, Dr Dean told Lab Down Under.

“This hasn’t been observed for any other wood decomposition processes. Even within the same species, myrtle beech, there are other decomposition mechanisms, that do not produce cunnite, just a loose, friable substance like when other tree species decompose.”

This was a substance which was not predicted, was unexpected, and was probably another small thing that scientists did not know about forest environments, Dr Dean said.

“This means we have a lot to learn yet. The main thing to learn is why only this particular species and a particular decomposition mechanism produces cunnite. It means there’s something special about the chemistry of this timber — what is it? Some myrtle beech trees contain a type of wood called ‘deep red myrtle’ (which is treasured for furniture) — is this related to cunnite?” he asked.

There was a need to better understand the chemistry of cunnite in order to answer these questions, Dr Dean suggested. With the original timber decomposed and possibly even re-polymerised, it was likely the building blocks of cunnite were smaller than in the timber it came from and would thus be easier to determine.

Polymers are long, complex molecules that are used to make plastics and resins found often in everyday life. Some are tough, like glass, while others bend, like rubber. The process of polymerisation refers to the joining together of smaller atomic components in the creation of the longer polymer molecule.

While cunnite seems to only have a short lifespan compared with, for example, coal and contains only a small proportion of the total carbon in the forest, it is important for a variety of scientific reasons, including that learning more about its make-up and formation could help uncover more about how wood itself decomposes.

“Another importance of cunnite is that its discovery so long after we started removing such forests means there could be a lot more to learn about mature forests if people start working on the remaining vestiges before they are logged out of existence,” Dr Dean said.

The researchers aimed at looking at old-growth trees and their roots to fill a gap in knowledge and better understand how to balance carbon calculations associated with logging and deforestation. In Tasmania, larger old-growth trees are logged, giving scientists a unique opportunity to examine the roots.

It was in this environment that cunnite was discovered, Dr Dean said, although he noted it might have been noticed previously by the local Indigenous population.

“I was examining the roots of one such tree, slowly chiselling the soil away from the roots, when I noticed that in the hollow centre there were kilograms of an unusually hard substance that must have at one time been the central trunk of the tree.”

The substance had taken such a long time to discover, Dr Dean said, because scientific studies in this area typically focused on the commercial aspects of logging such as timber production and ignored other areas.

“Mature native forests in Australia are sort of free for the taking by industry because there are minimal up-front costs compared with having to plant before logging. And there has never been an intention by industry to re-create mature forests, only to replace them with young timber crops,” Dr Dean said.

“There’s been no need for industry to invest in these studies, except for extraction mechanisms and wood processing mechanisms. For example, a lot of scientific effort has been put into how to turn eucalypt timber into paper.”

Analysis through carbon assay, radiocarbon dating, scanning electron microscopy and Fourier transform infra-red spectroscopy suggested that cunnite was both high in carbon and lignin, at a density similar to that of anthracite coal, Dr Dean said.

Lignin itself is a polymer made during photosynthesis and is vital to the structural strength of trees. The actual structure of lignin is so complex that its full molecular make-up has not been determined yet, with scientists so far only uncovering fragments of the whole.

The substance has also garnered recent interest for its use in chemical engineering and materials science, Dr Dean said, with lignin even being considered as a precursor for carbon fibres2. Natural substances containing lignin, such as nut shells or agricultural waste products, could be processed to form carbon-concentrated materials containing miniscule pores.

“Such porous materials can then be used for adsorption and storage of other substances such as pollutants or of the energy source, hydrogen,” Dr Dean said.

If cunnite could be produced synthetically, this could have further positive results, Dr Dean added. The production of this material should be possible at low temperatures if further research uncovered what the composition of cunnite was.

“If it can be made synthetically in a similar process to fungal decomposition then energy can be saved in making high lignin substances (compared with for example pyrolysis), which will mean less greenhouse gases from industry and therefore less forests burnt due to climate change.”

Pyrolysis is the decomposition of materials at very high temperatures, and is one of the most promising ways currently of converting lignin into other biomaterials3.

Other possible outcomes stemming from cunnite research include creating a new family of polymers via the discovery of cunnite’s re-polymerisation mechanism, and actually building on the decomposition that produces cunnite.

“It might be possible to develop the decomposition mechanism further and apply it to waste wood that is otherwise left to decompose (e.g. in landfills), so that the waste wood doesn’t decompose so rapidly and add to humanity’s greenhouse gas emissions,” Dr Dean said.

Professor Ernst Horn of the Department of Chemistry at Rikkyo (St Paul’s) University in Tokyo was co-author on the cunnite paper and helped interpret the infrared spectra of the material. Professor Jamie Kirkpatrick and other staff at the University of Tasmania were crucial in
supporting the project. Dr Dean also sent thanks to the radiocarbon dating lab at Queens University, Belfast.