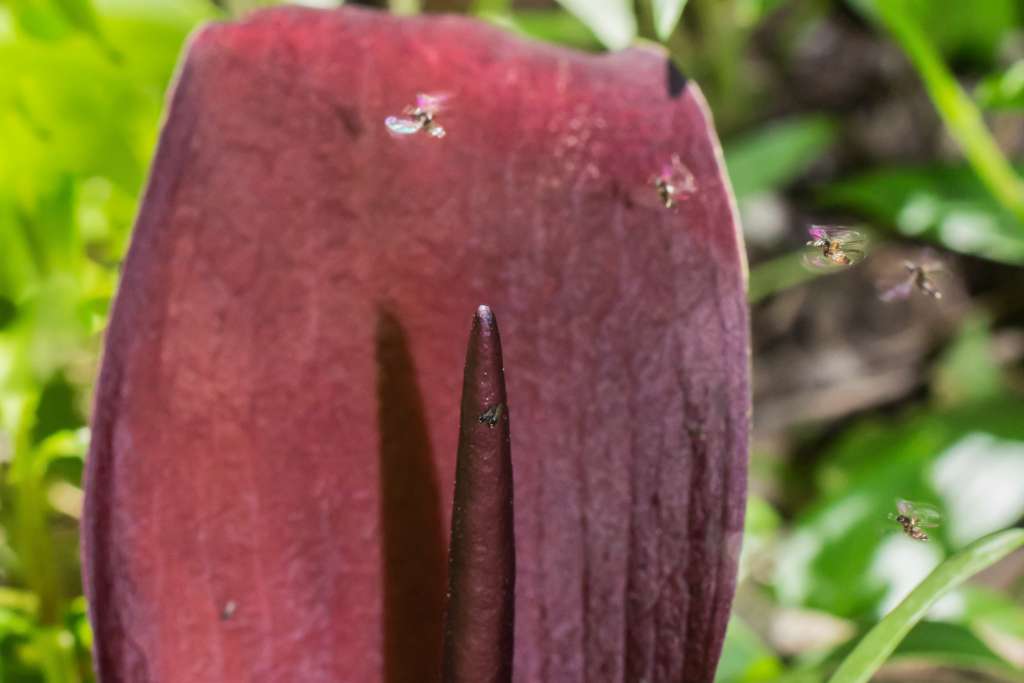 On the east coast of Australia lie a type of arum lily which has foregone the typical sweetness of nectar to attract pollinators, instead opting for a more pungent, dung-like odour to attract flies and other insects for pollination and the continued cycle of life.

Limited knowledge on how these plants have evolved to attract specific pollinators has led scientists at the University of Melbourne and La Trobe University to publish a paper1 examining variations in pollinators, floral morphology, scent and even heat production within two species of arum lily (family Araceae) across multiple populations in New South Wales and Queensland.

Dr Thomas Sayers of the University of Melbourne’s School of Ecosystem and Forest Sciences sat down with Lab Down Under to discuss what the research had uncovered about variations in these plants, what that revealed about their evolution, and why these types of studies were so important in our understanding of pollination as a process.

How to dupe a pollinator

The most famous arum species is the titan arum or corpse flower, a plant native to Sumatra which produces the world’s largest inflorescence (a group or cluster of flowers arranged on a stem). This inflorescence can reach over three metres high and imitates the appearance and smell of rotting flesh.

Dr Sayers’ research examined two closely related (but much smaller) arum species found here in Australia, Typhonium brownii and Typhonium eliosurum, which were confirmed to be part of a small group of angiosperms (flowering plants) known as floral mimics.

In general, angiosperms use “honest signals” to attract pollinators and advertise the presence of a floral reward such as nectar or pollen, Dr Sayers said.

“In T. brownii and T. eliosurum, however, no rewards are present and pollinators are duped into visiting inflorescences through a type of mimicry known as brood-site mimicry involving the imitation of decomposing substrates.”

The research identified that both species emitted complex floral scents containing a number of prevalent compounds, such as skatole and p-cresol, which are also common in animal dung.

“This relates to our finding that T. brownii and T. eliosurum are pollinated by dung-seeking beetles and flies, respectively,” Dr Sayers said.

Both species are also able to undergo thermogenesis, with some T. brownii inflorescences heating in excess of 16°C above the ambient temperature. Temperature increases peak when the arum lily’s female flowers are receptive and trying to attract pollinators, the research found.

“It may be that temperature increases act to enhance scent volatilisation, and/or in deceptive systems it may actually directly mimic the heat of animal dung or carrion.”

The research found that despite the remarkable complexity and variation of T. brownii floral scents across the regions studied, there were still several shared compounds which may be most important for the attraction of beetle pollinators, Dr Sayers said.

The daily timing of floral activity (known as anthesis) and floral heating also varied significantly across different populations of T. brownii. This could correspond to the different circadian rhythms of local pollinators, the study suggests.

The extent to which T. brownii and T. eliosurum were specialised to different pollinator groups, that is dung-seeking beetles and flies respectively, throughout the different populations studied was also fascinating, Dr Sayers said.

“A number of floral traits varied between the two species, and we argue that fly pollination was particularly associated with several floral morphological adaptations in the floral trap system of T. eliosurum.”

In some arum genera (plural of genus) such as Typhonium, the female flowers are located at the base of a specialised leaf called a bract inside a trap known as the floral chamber.

Further up the bract and outside the chamber are the male flowers and a long sterile appendix surrounded by a fleshy spathe, a brown outer sheath-like component which could be confused for a giant petal.

Pollinating insects become stuck in the trap while the female flowers are receptive and are released the following day during pollen shed.

“An interesting aspect of arum pollination is that to promote cross-pollination and avoid self-fertilisation, they are generally protogynous meaning that the female and male stages of flowering are separated in time,” Dr Sayers said.

On day one of flowering during the female phase, the inflorescence opens and attracts pollen-covered pollinators which are then funnelled by the steep slippery spathe into the floral chamber which house the receptive stigmas. A stigma is the reproductive organ of the plant which function is to receive pollen.

The spathe then constricts around the bract and traps the insects inside until pollen shed the following day. When pollen shed commences the constriction loosens and the spathe attains a more horizontal position allowing insects to escape as they get covered in pollen.

“With any luck (for the plant that is) these pollen loaded insects will become trapped inside the floral chamber of a neighbouring plant during the female stage to enact cross-pollination and re-live the whole ordeal again,” Dr Sayers said.

Apart from being inconveniently trapped for 24 hours and possibly a few casualties, the pollinators themselves are generally not harmed during this trapping process.

Not many people are aware of Australia’s diverse selection of arum flora, around 80 per cent of which fall into the genus Typhonium, Dr Sayers said.

“Typhonium is incredibly diverse in Australia (over 30 species), with the majority of species here occurring nowhere else in the world and several of which are listed as rare and/or threatened.”

Part of the reason why there were so few studies examining intraspecific (within species) variations was because of the time and difficulty involved in collecting pollination data across multiple regions in Australia, Dr Sayers said.

“Australian Typhonium are particularly difficult to study in this respect as they are hard to locate in the wild, and they only emerge from underground tubers during the spring and summer months with individual inflorescences active for less than 36 hours.”

Local knowledge from people like park rangers, botanists, ecologists, and naturalists was key to finding the species at the heart of Dr Sayers’ research, with many individuals chipping in to help locate or access populations of Typhonium across the country.

“An example of this was landowner Alan. Aware of a population of strange lilies, he kindly gave me access to the T. brownii population accessible only via his property. Everyday I was greeted by his friendly cattle and eastern grey kangaroos as I entered his paddock and commenced the steep trek through the scrub up the Wingen Maid Range in the Upper Hunter Valley.”

Citizen science tools such as the Atlas of Living Australia and the Australian Virtual Herbarium were also invaluable, Dr Sayers said.

Towards understanding and conservation

These types of studies are important to help scientists understand why certain floral traits and plant species have diversified. Changes in the types of pollinators available to a plant are thought to be one of the main drivers of diversification and the creation of new species among flowering plants, Dr Sayers said.

“One of the main aims of our published study was to incorporate a geographical context to the pollination systems we studied, and which is why we chose to investigate T. brownii as it is the most widespread Typhonium species in Australia.”

Around 85 per cent of flowering plants are pollinated by animals (mostly insects) yet little is known about the vast majority of these interactions.

This gap limits our knowledge of the evolutionary processes that gave rise to these interactions, the dependence on specific pollinators for plant reproduction and the resilience of plant-pollinator interactions during environmental change, Dr Sayers said.

“Fundamental natural history research is therefore critical to not only understand the ecology and evolution of plant-pollinator relationships, but also to help conserve rare and/or threatened plant species such as T. eliosurum and a variant of T. brownii investigated in our study.”

Further research is required on arum lilies, as many other species of Typhonium continue to be discovered in Australia, Dr Sayers said.

“As part of my PhD2 I explored the pollination of additional species across tropical and temperate Australia and I am in the process of publishing this work, although much more remains to be understood about their pollination. High-resolution genetic analyses are also required to better understand their true diversity and the evolutionary relationships between species.”