Sniffing out danger: Study suggests fruit flies use smell to adjust their reaction to predators 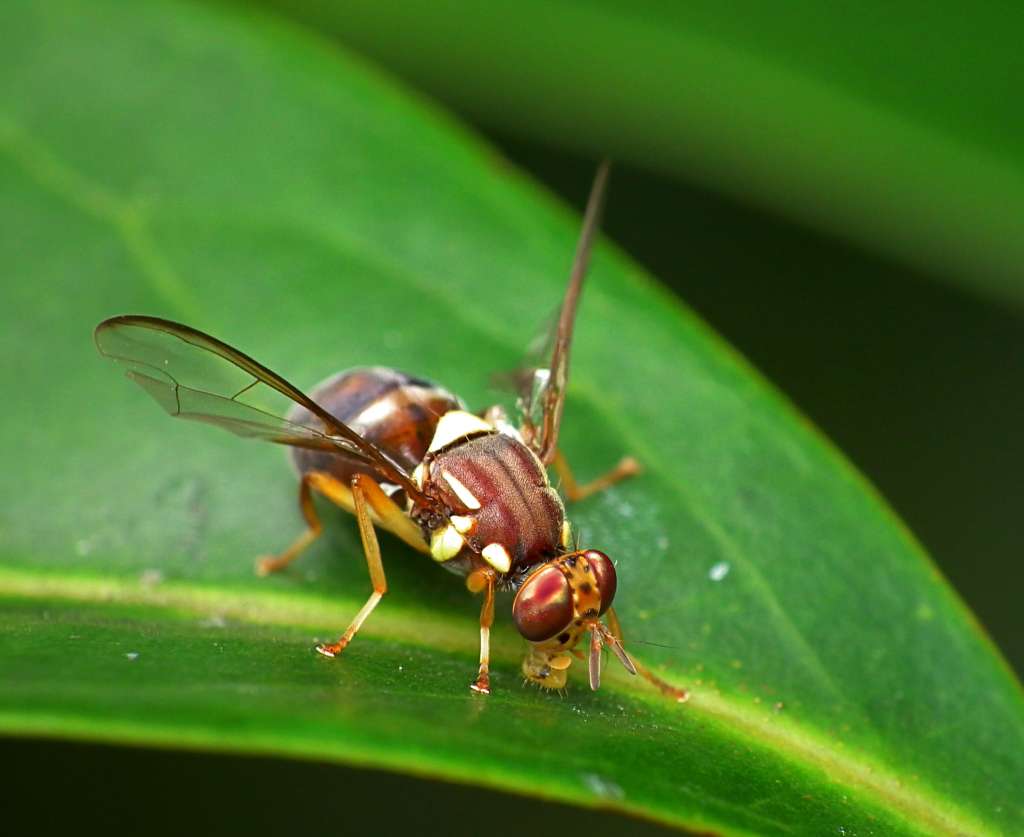 With the Queensland fruit fly dealing hundreds of millions of dollars in damage to crops in Australia, new research has suggested these insects may modify their response to different predator types using smell, in a find which could pave the way for the development of new types of plant protectants.

The study1, conducted by scientists at Macquarie University and published in Scientific Reports, found that the Queensland fruit fly, Bactrocera tryoni, reacts in different ways to the olfactory cues, or scents, coming from four potential predators.

Lead author of the paper, Vivek Kempraj of the Department of Biological Sciences at Macquarie University, looked into this area amid a surprising dearth of research on the Queensland fruit fly. This was despite the insect being considered a serious horticultural pest that produces an estimated $300 million worth of economic losses per year2.

“Although there are 3,000 to 4,000 fruit fly species in the world today, not a single fruit fly had been studied for their predator-prey interactions. This was really very weird and actually instigated me to work on this aspect,” he told Lab Down Under.

One of Australia’s most disastrous pests

The Queensland fruit fly is a native species to Australia. Native to tropical northern Queensland, it is now found across the country’s east coast thanks to the increased spread of agriculture, human development and transportation.

By studying the fly’s response to olfactory cues of certain predators such as spiders, Kempraj hoped that his research could lead to the development of plant protectants for what he called “one of the most disastrous pests” in Australia.

The study itself looked at the fly’s response to four different potential predators: three spiders and an ant. Kempraj said that assumptions had to be made that these were indeed predators of the fruit flies because no prior research had actually been done on this area to confirm this.

“Nobody has previously studied the predator-prey interaction, so no one has documented what may be or what are the predators of these flies.”

The potential predators chosen for the study included:

These were picked because they were found in proximity to places were the flies are now found, Kempraj said.

“There’s a place called Somersby that’s about 50 kms away from Sydney where there are orange orchards run by the Department of Primary Industry. When we did a survey there, we found these three spider species to be common,” he told Lab Down Under.

The green tree ant lives on fruit trees in the native region of the Queensland fruit fly. It was also chosen because its sister species Oecophylla longinoda in Africa has been shown to have a repellent effect against fruit flies, Kempraj said.

“Flies may detect ants and may not go to trees where ants are present. It’s just a cautious move – I mean they don’t want to get eaten, right? So it’s a cautious step taken by a prey to avoid predators.”

An unexpected diversity of reactions

To the researchers’ surprise, the fruit flies actually reacted differently when experiencing odours from each of the four potential predators.

For odours from H. minitabunda and O. smaragdina, which are both active during the day, the fruit flies flew or walked faster. On the other hand, the flies actually slowed down when supplied the odour of the nocturnal spider, C. robusta, and did not change their behaviour with the odour of O. quadratarius.

“H. minitabunda is a diurnal spider that is active in the day. When the flies were allowed to react to the olfactory cues of this particular spider, they actually flew more in the sense that they were flying away from that particular area. So they knew that there was something over there,” Kempraj said.

“C. robusta is a cosmopolitan, nocturnal spider. It hunts predators based on vibrations rather than on vision or smell. So what the flies do is they almost stand still. They don’t move at all in the presence of this particular spider.”

The flies did not react to O. quadratarius as the spider was not local to northern Queensland where the fruit flies were originally from and the flies had not had the chance to evolve to its olfactory cues over time.

“What was really surprising was that the flies have different strategies towards different spiders based on their diurnal activity and based on whether they have encountered them in evolutionary time,” Kempraj said.

The research also showed that the flies reduced their foraging, egg laying and mating around different predators.

The flies tested were ‘naive’ as they had been in the lab for 30 generations without any prior experience of predators. Each generation lives for about two or three months.

This meant their reactions to the four potential predators studied in the research were due to something innate rather than something learned, Kempraj said.

A call to arms against a flying enemy

Further research was required on the Queensland fruit fly and its possible predators, Kempraj told Lab Down Under.

“If we document the right predator, we can actually find new chemicals which can have different effects on the fly’s behaviour. Using those kinds of studies, we could even develop agricultural products to repel these flies in Australia.”

The research could also uncover more about the neurological basis of fear, he added, noting that studies on flies and their brains could be translated into research on humans.

“Although fruit fly brains are different to human brains, some bases can be replicated in humans. We have fear and so do animals, so if you find the neural basis of fear in animals, you can easily translate that into a human study. “

As for his own personal next steps, Kemprej said that his focus would be on developing new products that repelled these flies and helped farmers increase their yield.

“These fruit flies have been causing havoc in Australia for the past 20 to 30 years. The government is spending billions on controlling them through the sterile insect technology program but there is still a lot of damage that’s happening. We need to come up with different methods and strategies to contain these flies, if not eradicate them.”