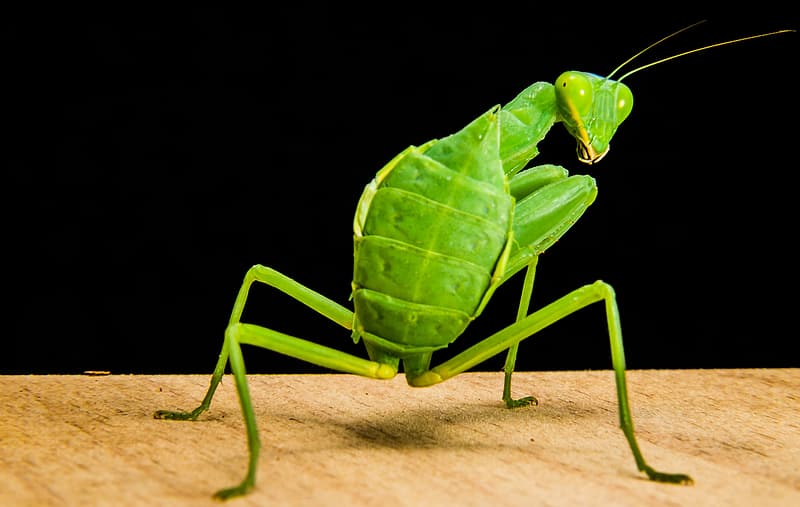 Imagine you’re a praying mantis minding your own business and you suddenly stumble upon a bird, spider or some other predator. What you do to try and scare your enemy off depends very much on where you are in the mantis evolutionary family tree, according to new research on startle displays — rapid, dynamic responses to predators — found in these colourful, charismatic insects.

A collaboration of Australian and US researchers looked at 58 mantis species found worldwide in an attempt to determine the evolutionary forces behind startle displays, which cover a range of responses including foreleg flicks, sudden hissing and flashes of colour.

What are startle displays?

Dr Kate Umbers, senior lecturer of zoology in Western Sydney University’s Faculty of Science was senior author of the paper. Chatting to Lab Down Under, she described what startle displays were and why they were so hard to actually define.

“Startle displays have to be quite fast. How fast is anyone’s guess but they do seem to have to be fairly rapid in their performance. They have many kinds, so they can be auditory or visual for example. Ultimately what they have to do is disrupt the predation sequence.”

Startle displays exist in all kinds of creatures. Praying mantises were the subject of the study, including the devil’s flower mantis which flicks its raised forelegs around, showing the red, white, blue and black areas underneath, while swaying its body and opening up its wings.

Other animals also exhibit startle displays, including gunnards, a type of fish with bright eye spots on its pectoral fins, and the sunbittern, a Central American bird that can flash large eyespots on its wings when threatened.

Dr Umbers told Lab Down Under that she gained interest in startle displays by stumbling upon the mountain katydid while conducting PhD research in Australia’s Snowy Mountains. When threatened, this katydid pops its brown wing cases open, revealing a red, blue and black pattern underneath. Bright colours can be an actual warning to predators and typically mean an animal is toxic or unpleasant to eat.

“They pop open and you get a delightful surprise. Imagine a charismatic, bumbling little creature that just happens to feel a little bit unsure of whether or not you’re a predator and gives you a little warning flash,” Dr Umbers said.

A 2015 research paper2 by Dr Umbers found that unusually the mountain katydid only exhibited a startle display by flashing its colours after it had been attacked. This was in stark contrast to prior theories that the displays were meant to actually warn predators off before an attack rather than during it.

Scientists still have a lot to learn about startle displays because they are so complex and therefore difficult to study — requiring the measurement of the many components of a display as well as what makes a creature actually decide to perform it, Dr Umbers said. Variables such as the intensity at which an animal uses its displays, the different components they opt to make use of, etc add to the complexity.

“Because there’s a dynamic element to it, the prey make a choice as to whether or not to display — and because often different components of display can be used independently, the number of variables we have to measure is humungous compared to a static display,” she told Lab Down Under.

Scientists only really gained the ability to measure these types of dynamic displays through affordable slow motion video technology or realistic animations that can test predators’ reactions to the displays.

One other unknown was precisely which predators these startle displays were supposed to scare away, Dr Umbers said.

“It’s really hard to find out who the predators might be, because you have to sit in the field for hours upon hours and see who tries to eat these things. That’s the only way to really properly find out. Or, like we do in behavioural ecology, you can put out little plasticine models of creatures and then analyse the attack marks that are left in the models. This might tell you if the model was attacked by, say a large bird or a small bird, but getting an identification of the species is hard unless you’re clever like Daniela Roßler and use traces of DNA3.”

Despite these difficulties, actually studying startle displays was important, Dr Umbers noted. As well as helping humanity understand fundamental questions such as how these organisms defend themselves from predators, new discoveries about these “really cool, interesting and bizarre” creatures could help people think about conservation in wider terms beyond well-known, headline grabbing animals such as koalas.

“If we don’t engage people and really showcase the remarkable, beautiful and astonishing aspects of these species, we’re less likely to get people thinking about the little ones — those that perform critical ecological functions. So telling those stories is critical,” Dr Umbers said.

To find out more about mantises and their startle displays, Dr Umbers and her team examined findings from prior research papers spanning seven decades on 58 mantis species around the world. Using previously collected data was much more efficient than having to personally travel overseas and examine these species in the field.

“For us to have collected this data ourselves would have taken at least five years, probably half a million dollars, and we would have had to rely heavily on local knowledge. We’re talking about places like Trinidad and Ghana — places that are not simple or cheap to get to from Australia. Then once there, we would have to find the species and do the measurements. Trying to do that for 58 species is non-trivial, to say the least,” she said.

Researchers studied both the colours of the wings, forelegs and abdomens of these individual species as well as behaviour such as mouth movements, wing displays, foreleg displays and sounds.

Prior researchers described these behaviours in a very systematic way which allowed Dr Umbers and her team to make direct comparisons between species that were studied in separate papers.

Using the phylogenetic tree — an evolutionary family tree showing relationships between species — Dr Umbers was able to assess and statistically analyse the presence and absence of the different traits that mantises presented in these displays.

After examining these 58 species, Dr Umbers discovered that colours did not change much between species that were close to each other in the phylogenetic tree while behaviours were more likely to differ. This finding by itself was not surprising, she said.

“Behaviours are more changeable by species. It’s easier for an individual to change their behaviour than to change their colour. So it’s really quite an intuitive point.”

However the research produced some unexpected findings, completely overturning a prediction that Dr Umbers and her team had going into the study. In essence, the scientists assumed that mantis species which were distant from others on the phylogenetic tree would exhibit startle displays while species that were relatively nearer to other species would not.

“We thought that mantises that were the most evolutionary distinct might also have the most complex displays — that they’re just out on their own trajectory doing something weird. But it actually turned out to be the opposite. It turned out that species with lots of close relatives were more likely to have complex startle displays,” she said.

The study generated a hypothesis that mantises that are closely related may be different from their nearest evolutionary relatives so that predators are less likely to learn what to expect from a mantis’ startle display, Dr Umbers said.

“If the predator population has come into contact with one of your closely-related species, that predator might be able to predict the kind of startle display you’re going to do based on its previous experience. If the element of surprise is key to the efficacy of startle displays, then your advantage is lost,” she told Lab Down Under.

“You should perhaps therefore be quite different to other species that the predator is likely to encounter so that the startle still works the next time the predator encounters a different species.”

With further research required to actually confirm this hypothesis, Dr Umbers has received a grant to test these startle displays on Australian magpies around Sydney in order to see whether diversity in startle displays actually has a protective effect.

“We will see whether the effect of novelty protects prey, because if that’s the case then it would then support the hypothesis that being different is more protective than being the same.”

Dr Umbers doesn’t plan to work with magpies because they are a predator that encounters the displays to be studied. Instead, she said they were an “easy” bird to work with, being territorial, able to be trained, and motivated by food for rewards.

“So we won’t be asking magpies about their own experience with actual startle displays that they see in the wild. We’ll be asking magpies to answer questions for us based on the artificial prey that we provide with which we can control all the aspects of the displays.”

However, Dr Umbers said that some magpies do have experience with some startle displays in the wild, having witnessed these bird eating mountain katydids in the Snowy Mountains.

A follow-on question then would be whether magpies can be used as a representative predator, i.e. does their behaviour extend to other predators in the wild? To answer this question, Dr Umbers said she would be working with researchers overseas.

“We will then be going to collaborators in Europe and the USA and asking if, for example, blue tits and blue jays and other model predator species respond in the same way to the same stimuli as we give to the Australian magpies. This will allow us to understand how universal the predator reactions are,” she said.

Researchers in the Royal Society paper came from the Australian National University, University of New England, Western Sydney University and the Cleveland Museum of Natural History.